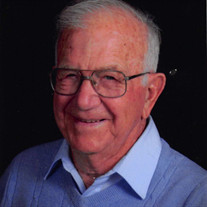 William S. Ray, 94, of Rossville left his earthly home on June 8, 2019 to be with the Lord whom he loved and served all of his life. Born June 5, 1925 in Van Wert, Ohio, to William Fernam and Louise Ray, Bill was the 8th generation of Rays where the first son was named William. The family returned to Illinois when he was 3 where as a child of the Great Depression, he developed a strong work ethic, a deep faith, and a stubborn determination that would create the proud, compassionate man whom his family and friends loved. Bill’s lifelong love of learning began at home and continued in a one room school. He graduated early from Sidney High School in 1943 so he could attend the University of Illinois for a semester before enlisting in the US Navy on his 18th birthday. As a mid-shipman, he continued his education at Notre Dame and Cornell University. He was commissioned as an Ensign in 1945 and assigned to the USS Indianapolis which was carrying the atomic bomb to be dropped on Japan. Because of the high security surrounding the ship and its mission, he never boarded the ship and it was sunk by a Japanese torpedo after delivering the bomb components. He completed his active duty on the USS Nashville as part of the Admiral’s staff. The Nashville was part of Cruiser Division 5 which was assigned to accept the surrender of Japanese troops in Shanghai who refused to surrender to the Chinese. He was honorably discharged from the Naval reserves as a ltjg in 1958. Like many of the greatest generation who were determined to save our liberty and the free world and were fortunate enough to return home, he lived his life grateful for his blessings proudly serving his God and country. After returning home in 1946, Bill completed his degree at the University of Illinois where he graduated in 1947 on time with his original class. He and Rosella Downs were married on August 3rd, 1947. He then taught school and coached basketball and baseball at McLean High School. After a successful 4 years, Bill and Rosella accepted an offer to return to farming and the independent lifestyle they had loved as children. They spent one year in Chenoa before settling in Funk’s Grove near McLean on the farm where they would raise their family and continue their life of faith, hard work, and service for the next 27 years. Bill displayed his love for young people with his involvement with them by coaching Little League and a church basketball team, being a church youth group leader, or by just being “Grandpa” to many kids beyond his own family. Bill and Rosella fulfilled their dream of owning their own farm when they took a leap of faith and a financial risk to purchase the Christman Farm east of Rossville which is still farmed by their family and they named Raynbow Acres. Rossville has been home since they moved there in 1975. Bill retired from active farming in 1987 but continued to work hard. He continued to work as long as he could including mowing his own yard until this year. He took great pride in his farm and his retirement home in Rossville, but he also greatly enjoyed winters in Florida with his family and friends there. In retirement, Bill enjoyed his grandchildren, woodworking, and golf. Each grandchild and great-grandchild has a special wooden truck, trunk, or jewelry box made by grandpa that they can treasure. As the oldest member at Hubbard Trail Country Club, he was still golfing last year with his buddies in the old timer’s league and his friends in Florida. Also, it is fun to say that he was able to golf with his great-grandchildren. A life-long Methodist, Bill served the United Methodist Churches in McLean, Chenoa, and Rossville in many capacities including Sunday School teacher, Chairman of the trustees and lay speaker. He also participated in many mission trips and activities. Through the years, Bill was involved in community and school organizations including the American Farm Bureau. He was a member of the American Legion for 72 years. He was called upon to use his business expertise when he was elected Chairman of the Board of Carribean Isles in Florida when the park residents purchased the park to become one of the first resident owned corporations. Bill Ray loved his family. He is survived by his wife Rosella, his sister Mary Helen Moser Jedlick; four children: Cathy Douglass (Jerry), Chris Mount (John), and William Robert “Bob” (Mary Jo) and his foster son David Ealy (Sandy). Nine grandchildren: Garrett (Heather) Douglass, Annette (Ryan) Moravec, Kara (Shane) Dowell, Tammy Knight (Craig Canfield), William Gregory Ray, Bradly Ray, Brian Ealy (Janice), William Benjamin Ealy (Justine), and Patrick Ealy (Laura), a godson John McCalla (Kim), and a chosen grandchild from Peru, Sofia Delgado. Nineteen great-grandchildren and one great-great grandchild. Services for Bill will be held at the Rossville United Methodist Church, 116 Maple St. Rossville, IL, on Thursday, June 13 at 10:30 A.M. with Pastor Chris Quick officiating. Visitation will be held at the church from 3-7 P.M. on Wednesday and one hour before the funeral. Burial will be in the Rossville Cemetery. Military rites will be accorded by the Hoopeston American Legion Post #384. Memorials may be donated to the Rossville United Methodist Church or Mustard Seed Christian Daycare. The family would like to thank Iroquois Memorial Hospice for their excellent care, so Bill was able to stay at home and Anderson Funeral Home for making all the funeral arrangements. P

William S. Ray, 94, of Rossville left his earthly home on June 8, 2019 to be with the Lord whom he loved and served all of his life. Born June 5, 1925 in Van Wert, Ohio, to William Fernam and Louise Ray, Bill was the 8th generation of Rays... View Obituary & Service Information

The family of William S. "Bill" Ray created this Life Tributes page to make it easy to share your memories.

Send flowers to the Ray family.