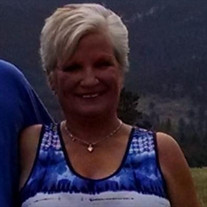 Yvette Marie Crothers, 57, of Hoopeston, IL, passed away at 6:03 A.M. Saturday December 4, 2021, at her home. She was born October 17, 1964, in Danville, IL, the daughter of Richard and Nancy (Ford) McClure. They survive in Cayuga, IN. She married Richard “Rick” Crothers on January 11, 2008, in Danville, IL. He survives in Hoopeston. In addition to her parents and husband, Yvette is also survived by three daughters, Ashley Winland of Chrisman, IL, Belinda (Levi) Baysinger of Bloomfield, IN, and Andrea Lopez of Hoopeston, IL; two sons, Michael Winland of Danville, IL and David Cohen of Kansas City, KS; one brother, Brian (Michelle) McClure of Rogersville, MS; 11 grandchildren, Dallas, Mackenzie, Sophie, MaKaylah, Maddison, Emma, Brayden, Bryley, Kenzley, Arwen, and Gianna; and three nephews, Raphael, Richard II, and Nicholas. She was preceded in death by her maternal grandparents, Sterling and June Ford and paternal grandparents, Fredrick and Iola McClure. Yvette worked at CVS in Hoopeston for six years. She enjoyed riding motorcycles, working in her flower garden, and being around people. She loved her dog, Shiloh, and especially loved taking care of her grandchildren. Per her wishes, she will be cremated, and a celebration of life will be held at a later date. Memorials may be made in Yvette’s memory to A.B.A.T.E. of Illinois, P.O. Box 526, Avon, IL 61415-6588.

The family of Yvette Marie Crothers created this Life Tributes page to make it easy to share your memories.

Send flowers to the Crothers family.