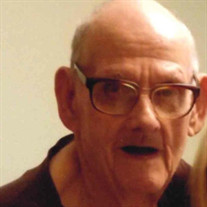 Wylie Roy Flippin, 87, of Hoopeston, IL, passed away at 4:20 A.M. Friday March 25, 2022, at Carle Foundation Hospital in Urbana, IL. He was born May 30, 1934, in Electra, TX, the son of Roy H. Flippin and Thelma (Manor) Hallmark. He married Barbara Padgett on May 17, 1959. She preceded him in death. He is survived by one daughter, Virginia Flippin of Hoopeston, IL; one son, Wylie Flippin Jr. of Clemmons, NC; two granddaughters, Amanda (Markus) Taenzl and Dana (Jason) Broussard; one great-granddaughter, Ryan Renee Broussard; one great-grandson, Colton Jude Broussard; and several nieces and nephews. In addition to his wife, he was preceded in death by his parents; one daughter, Mary Jane Flippin; two sisters; and two brothers. Wylie worked as a welder at Frank’s Case and Crew in Lafayette, LA. He enjoyed playing golf, watching golf on television, and was an avid LSU and New Orleans Saints’ Fan. Per his wishes, he will be cremated, and no services will be held. Memorials may be made in Wylie’s memory to the donor’s choice.

The family of Wylie Roy Flippin created this Life Tributes page to make it easy to share your memories.

Send flowers to the Flippin family.