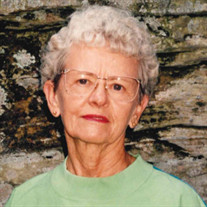 Winifred Lillian Thomas, known as Winnie, 96, of Danville, IL, formerly of Rossville, IL, peacefully passed away on Friday April 22, 2022, at the Villas of Holly Brook in Danville, IL. She was born in Grand Forks, North Dakota on a cold and blustery March 27, 1926. At the time, her mother, Lillian Johnsen Houldridge, her father, Edgar A. Houldridge, and her brother Ronald were living in the small town of Thompson, South of Grand Forks, where Edgar was the Methodist minister. Winnie lived in several Illinois towns as the family moved from church to church. She moved from Sheldon to Rossville in 1943. It was there that she met a handsome classmate and her future husband Max Lee Thomas. As a cheerleader in high school, Winnie developed her love of sports. She was especially fond of Illini basketball, but her greatest pleasure came from watching her grandchildren and great-grandchildren play ball and participate in track. In 1946, she began her nursing career as a student at the Lakeview School of Nursing. At this time, she also completed her training for the Cadet Nurse Corps. If the essential job of a nurse is to care for others, Winnie was a nurse throughout her life. She worked as an obstetrics-gynecology and pediatric nurse at Lakeview Hospital in Danville in the 1950s and again in the late ‘60s and 1970s. When her children were in grade school and high school, she worked as a nurse in the office of Dr. Waschick in Rossville. When her kids moved off to college, she returned to pediatric nursing at Lakeview. Whether working as a nurse or not, Winnie was consistent in caring for others. Winnie traveled widely during her life. Her travels took her to most of the United States and British Columbia in Canada. She cruised the Caribbean with her daughter Kathy and her family. She also traveled with her father to Norway where her mother’s family came from, and England where her father was born. An accomplished seamstress, Winnie made clothing throughout her life. Later, she turned her focus to quilting, and she made numerous quilts and smaller quilted products, all done with artistry and meticulous care. Following the loss of her husband Max, she lived in Autumn Fields in Hoopeston. She later moved to the Villas of Holly Brook in Danville where she continued to be a cheerful and supportive member of the community. She was preceded in death by her husband Max and daughter Kathy Layden in 2016, her sister Gwendolyn McCorkle, and brother Ronald Houldridge. She is survived by her son Stephen Thomas (Keven Roth), granddaughter Abbie Layden Rogiers, grandson Matt Layden, and great-grandchildren Avé, Oliver, Raenen, Taddy and Yelka Layden. Per her wishes, she will be cremated. A memorial service will be held at 6:00 P.M. Friday May 20, 2022, at the Rossville Church of Christ 514 E. Attica St. Rossville, IL, with Pastor Kevin Purdy officiating. Visitation will be held prior from 4:00 – 6:00 P.M. No burial will be held. Memorial contributions may be made in memory of Winnie to the Lakeview College of Nursing or the Rossville Historical Society.

Winifred Lillian Thomas, known as Winnie, 96, of Danville, IL, formerly of Rossville, IL, peacefully passed away on Friday April 22, 2022, at the Villas of Holly Brook in Danville, IL. She was born in Grand Forks, North Dakota on a cold and... View Obituary & Service Information

The family of Winifred Lillian "Winnie" Thomas created this Life Tributes page to make it easy to share your memories.