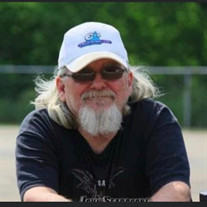 William “Bill” Sanford, 64, of Hoopeston, IL passed away at 3:47 P.M. Monday, September 27, 2021 at his home. He was born December 6, 1956 in Watseka, IL, the son of Jim and Nancie (Ingram) Hardwick. He is survived by two daughters, Sonya Sanford of Jefferson City, MO and Samantha Sanford of Hoopeston, IL; two sons, Marty Jo Sanford of Tucson, AZ and Chad (Bobbi Jo) Sanford of Sheldon, IL; one sister, Betty (Steve) Comstock of Hoopeston, IL; three brothers, Ed (Robin) Sanford of Rantoul, IL, Carl (Marla) Sanford of Hoopeston, IL, and Brian (Diane) Snyder of West Aurora, IL; seven grandchildren, Bryce Schwartz, Hannah Sanford, Madalynn Sanford, Leah Huls, Desiree Sanford, Caiden Sanford, and Shatee (Brad) Slack, and many nieces and nephews. Bill was preceded in death by his parents; one sister, Anita Hardwick: and one daughter, Dawn Marie Sanford. He served two years in the United States Army during the Vietnam Conflict and then served eight years in the National Guard, as a medic. Throughout his life, he drove a truck for several different companies. He enjoyed riding motorcycles, helping people, hanging out with his friends, and spending time with his family. He was always the life of the party. Per his wishes, cremation rites will be accorded and burial will be at the Danville National Cemetery at a later date. Memorials may be made to the family.

The family of William "Bill" Sanford created this Life Tributes page to make it easy to share your memories.

Send flowers to the Sanford family.