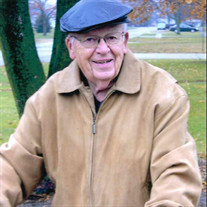 William E. “Bill” Musk, 99, of Hoopeston, IL, went peacefully to be with his Lord at 3:03 A.M. Tuesday February 1, 2022, at Heritage Health of Hoopeston. Born April 3, 1922, in Hoopeston, he was the son of Joseph E. and Grace (Bennett) Musk. He married Betty Moore on February 16, 1947, in Goodwine, IL. Surviving are three sons, Dinty (Sally) Musk of Hoopeston, David (Darlene) Musk of Cheneyville, and Doug Musk of Watseka; 8 grandchildren; 18 great grandchildren; and one sister, Peggy Pikna of Akron, Ohio. He was proceeded in death by his parents, his wife, two brothers and two sisters. Bill served in the United States Air Force from September 30, 1942, to January 30, 1946. He was a life- time member of the United Methodist Church of Hoopeston, the Hoopeston American Legion Post #384, and the Hoopeston Masonic Star Lodge #709 where he had served as a past Master. He worked for 43 years at FMC in Hoopeston until he retired. Bill enjoyed going to Texas for the winter, playing cards, telling jokes, taking bus trips to the casino, and camping at Timber Meadows. He loved watching all sports and was an avid Illini fan. A visitation will be held 10:00 A.M. – 12:00 P.M. Wednesday February 9, 2022, at Anderson Funeral Home 427 E. Main St. Hoopeston, IL. The funeral service will follow the visitation and will begin at 12:00 P.M. Wednesday at the funeral home, with Pastor Kathy Murphy officiating. Burial will follow in Floral Hill Cemetery in Hoopeston. Military rites will be accorded by the Hoopeston American Legion Post #384. A masonic service will be held at 11:45 A.M. at the funeral home. Memorials may be made to the Hoopeston United Methodist Church 403 E. Main St. Hoopeston, IL.

The family of William E. "Bill" Musk created this Life Tributes page to make it easy to share your memories.

Send flowers to the Musk family.