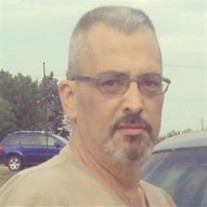 William Leroy McNeely, Jr., 47, of Wellington, IL, passed away at 7:40 A.M. Thursday October 23, 2014 at St. Vincent Hospice in Indianapolis, IN. He was born June 7, 1967, in Paxton, IL, the son of William Leroy and Sandy (Kietzmann) McNeely Sr. He married Darlene Pence on May 21, 2010 in Danville, IL. She survives in Wellington, IL. He is survived by his father William McNeely Sr. of Hoopeston, IL; one daughter, Chelsea McNeely of Fort Meyers, FL; three step-daughters, Kellie (Chris) Reitz of West Lebanon, IN, Misty (Adam) Wiesneth of Greencastle, IN and Melissa (Jason) Little of Ocala, FL; three sisters, Lori (Greg) Shipman of Hoopeston, IL, Teri McNeely (Darrell Estes) of Milford, IL and Kasey (Kevin) Moore of Hoopeston, IL; 11 step-grandchildren; 2 nieces and 4 nephews. He was preceded in death by his mother and his grandparents. William worked at Danville Metal Stamping for 7 years. He later worked at Lyon Pride Metal. He was a member of the Good Shepherd Lutheran Church in Hoopeston. William served in the United States Army from 1985-1991. He enjoyed camping, fishing, wood working, working on mechanics and spending time with his family and daughter. Memorials may be made in William’s honor to the Hoopeston Animal Shelter 901 W. Main St. Hoopeston, IL 60942. No burial will be held. Military rites will be accorded by the Hoopeston American Legion Post #348 and the VFW Buddy Egnew Post #4826.

The family of William Leroy McNeely Jr created this Life Tributes page to make it easy to share your memories.

Send flowers to the McNeely family.