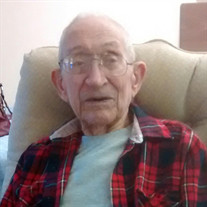 William H Guffey, 95, of Hoopeston, IL, passed away at 4:40 P.M. Wednesday June 22, 2016 at Watseka Rehab and Health Care. He was born February 17, 1921, in Ribbon, KY, the son of George and Permeolie (Garrett) Guffey. He married Clara Alice Elsey on March 25, 1947 in Austin, TX. She preceded him in death on August 17, 2014. He is survived by two daughters, Charlotte Martin of Rossville, IL and E. Aileene (Milton) Houmes of Hoopeston, IL. He is also survived by 5 grandchildren and 9 great-grandchildren along with several nieces and nephews. He is survived by one special niece and nephew, Ray and Debbie Guffey. He was preceded in death by 4 sisters and 5 brothers; his parents; and a son-in-law, Larry Martin. William went into the United States Army on March 29, 1943 and served until April 13, 1947. He worked as a crane operator at Martin Young Enterprises until his retirement. He was a member of the VFW. William enjoyed fishing, hunting, camping, and woodworking. A graveside service will be held 10:00 A.M. on Tuesday June 28, 2016 at Floral Hill Cemetery in Hoopeston, with Pastor Gary Milton officiating. Military rites will be accorded by the Hoopeston American Legion and VFW Posts. Memorials may be made to Baptist Camp Assurance PO Box 18, Georgetown, IL 61846.

The family of William H Guffey created this Life Tributes page to make it easy to share your memories.

Send flowers to the Guffey family.