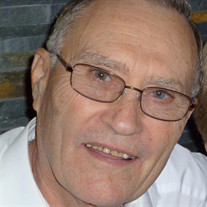 William E. “Putt” Putnam, 82, of Hoopeston, IL, passed away at 9:57 P.M. Saturday November 20, 2021, at Accolade Health Care in Danville, IL. He was born October 29, 1939, in Danville, IL, the son of George Edward “Ted” and Juanita (Melin) Putnam. He married Judith Griswold on June 18, 1960, at St. Anthony Catholic Church in Hoopeston. She survives in Danville. He is also survived by four daughters, Teresa (Pete) Sollars of Rossville, IL, Julia (Tom) Schnieder of Holly Springs, NC, Kathryn (Kurt) Ferry of Palatine, IL, and Patty (Graham) Merkin of Westmont, IL; one son, William “Bill” (Kristine) Putnam of Deltona, FL; one brother, Robert (Jean) Putnam of Richmond, KY; 12 grandchildren; 11 great-grandchildren; and 7 nieces and nephews. He was preceded in death by his parents. William began farming the family farm in 1960 with his father until his retirement. He was a member of St. Anthony Catholic Church in Hoopeston, where he was very active serving on the church board, teaching CCD, and was an eucharistic minister. He was also a member of the Knights of Columbus. He previously served on the East Lynn School board and later served on the Hoopeston-East Lynn School board. Putt was a Little League baseball coach and later went on to coach Pony League and legion ball. He was a former basketball referee and scout. William was an avid St. Louis Cardinals fan, owned several harness racehorses, and was a Big Brother to many. A visitation will be held 10:00 – 11:00 A.M. Saturday November 27, 2021, at St. Anthony Catholic Church 423 S. Third St. Hoopeston, IL. The funeral mass will be held at 11:00 A.M. Saturday November 27, 2021, at the church with Father Thomas Gibson and Father Ted Pracz officiating. Burial will follow in Floral Hill Cemetery in Hoopeston. Memorials may be made to St Anthony Catholic Church 423 S. Third St. Hoopeston, IL 60942.

The family of William E. "Putt" Putnam created this Life Tributes page to make it easy to share your memories.

Send flowers to the Putnam family.