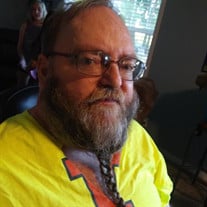 William Lewis Dickison, 52, of Alvin, IL, passed away at 5:30 A.M. Wednesday June 12, 2019 at his home in Alvin. He was born July 13, 1966, in Danville, IL, the son of Lewis and Lois (Rumble) Dickison. He is survived by one son, Levi Dickson of Danville, IL; three sisters, Louisa (James) Stevens of Danville, IL, Mary (Jay) Lewis of Lanark, IL, and Lynette Hancock of Alvin, IL; one brother, James (Sherrie) Dickison of Bismarck, IL; and several nieces and nephews. Also surviving is Levi’s mother, Tammy McFadden and Levi’s half-brother and half-sister, Garrett McFadden and Kaylee McFadden. He was preceded in death by one brother, John Dickison. William was a truck driver for many years. He attended the Alvin Church of God. He enjoyed fishing, listening to music, cooking, roller skating, and photography. He loved spending time with his family and his greatest enjoyment was being a Dad. William had a caring heart and enjoyed helping others. He will always be remembered for being outgoing and talkative. Per his wishes, he will be cremated. A visitation will be held 3:00 – 6:00 P.M. Wednesday June 19, 2019 at the Alvin Church of God, 109 South St. Alvin, IL. A memorial service will follow the visitation and will begin at 6:00 P.M. at the church, with Pastor Dan Hunt officiating. Burial will be held at a later date. Memorials may be made to the family of William C/O his son, Levi Dickison.

The family of William Lewis Dickison created this Life Tributes page to make it easy to share your memories.

Send flowers to the Dickison family.