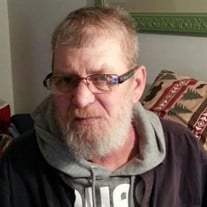 William Joseph “Billy Joe” Day, 51, of East Lynn, IL, passed away at 8:25 A.M. Wednesday, July 16, 2014, at his home in East Lynn, after fighting a hard battle with esophageal cancer. He was born October 28, 1962, in Urbana, IL, the son of Joseph Frank Day and Grace Anne (Uden)and Kenneth Sommer. He is survived by his mother Grace Sommer, two daughters, Jennifer Day of Rantoul, IL and Amanda Day of Champaign, IL; one sister, Peggy (Rick) Smith of East Lynn, IL and their children Nichole and Tyson; one brother, Tim (Melissa) Sommer of Rantoul, IL and their daughter Jennifer and four grandchildren, Makenzie, Makayla, Brooklynn and Kyleigh. He was preceded in death by his grandparents, his father and step-father. Bill served in the United States Navy from 1980-1984 and received certification as a Diesel Engine and Auxiliary System Technician. He worked for several years at Glass Specialty in Champaign and later worked for the Laborers Local 703 in Urbana, until his illness in 2013. He enjoyed bowling, watching Nascar and 4-wheeling. Bill had many loves in his life, including friends and family but nothing could compare to the love that he had for his grandchildren. As often posted by Bill on his Facebook page, “My only wish is for my grandkids to be happy”. There was no love like the love between Papa Bill and his granddaughters, Makenzie, Makayla, Brooklynn and Kyleigh. Memorials may be made in Bill’s memory to Carle Hospice 206a W Anthony Dr, Champaign, IL 61822.

The family of William Joseph "Billy Joe" Day created this Life Tributes page to make it easy to share your memories.

Send flowers to the Day family.