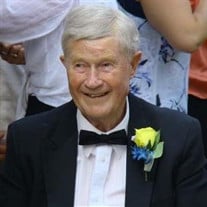 William “Bill” DeWitt, 87, of Hoopeston, IL, passed away Saturday September 26, 2015 after suffering a stroke during surgery. Illness was no stranger to Bill; he was treated for cancer for twenty-one continuous years and developed other health issues during that time. He rarely complained and kept his friendly outgoing personality throughout his life. He was born July 30, 1928, in Lovejoy Township, Iroquois County, IL, the son of Maynard and Melissa (Pellam) DeWitt. He married Claudia M. Farnum on June 30, 1979, in Hoopeston, IL; enjoying 36 years of a wonderfully happy marriage. She survives in Hoopeston. Bill and Claudia worked tirelessly to blend two families into one while preserving the happiness and dignity of each family member. Claudia’s children adored Bill as he did them, and loving them as his own. Claudia once stated “if all men treated their wife the way Bill treats me, there would not be any divorces”. He is survived by one daughter, Lisa (Jerry) Amore of Rossville, IN; one son, William “Billy” (Becky) DeWitt of Brookston, IN; three step-daughters, Deana Ratliff of Bloomington, IL, Elizabeth Gill and Jill (Kevin) Layden both of El Paso, IL; two sisters, Vivian Nelson and Thelma Lou Townsend; ten grandchildren, Matt, Alyssa, Evan, Ian, Emma, Charlie, Mason, Zachary, Katie and Betsy and five great-grandchildren, Blayz, Easton, Toby, Jack, and Ryder. Tiny baby Ryder came into this world the day his Poppie went to heaven, a bittersweet day for all. He was preceded in death by his parents, four sisters, Edith, Hallie, Jenny and Mildred and two brothers, Maynard Jr. and James R. DeWitt. Bill was born in Lovejoy Township, shortly after his family moved to Ambia, IN. He attended school in Ambia graduating from high school in 1947. He excelled in sports, playing basketball and baseball, and enjoyed running track. He is recognized in the Indiana Basketball Hall of Fame. Bill, like his father became an auctioneer. He cried his first sale at the age of ten, selling the lunches at a box social at his church. Bill continued his love of auctioneering most of his life, retiring in 2012. After his retirement Bill enjoyed doing benefit auctions for folks that needed a helping hand. Bill and his father operated DeWitt Auction Company for a continuous one hundred-two years. He served with great pride in the United States Navy during the Korean Conflict, 1951 to 1955. After a shortened basic training he was assigned aboard the USS Tarawa. He was trained as a Catapult Operator, firing planes off the aircraft carrier and recovering them as they returned from battle. He loved the Navy and once carried the American Flag in a parade in Melbourne, Australia in honor of a visit from U.S. Fleet Admiral W. Halsey. Bill was also privileged to play basketball all over the world for Navy, even playing in Madison Square Gardens. He was a District Farm Manager for Stokely Van Camp for thirty-two years. Bill loved his job and thoroughly enjoyed working with all the farmers he contracted to grow vegetables to be processed. He was a tireless advocate to the migrant workers he hired, caring for them as family. He prided himself in treating all the people he came in contact with the same way he wanted to be treated. Bill served the City of Hoopeston as Mayor from 2005 to 2009. He was a kind caring man and generous to a flaw. He fiercely loved his wife, family and would stop at nothing to ensure their happiness. Bill enjoyed a “BIG” life. He knew and appreciated a huge number of people from all walks of life. He was an active member of the First Christian Church in Hoopeston. Bill served in nearly every capacity of the Board at one time or another. He was also an Elder Emeritus. Please join Bill’s family at a visitation being held 4:00 P.M. – 8:00 P.M. Friday October 2, 2015 at Anderson Funeral Home 427 E. Main St Hoopeston. The funeral service will be held at 11:00 A.M. with a visitation from 10:00 A.M. – 11:00 A.M. before the funeral service at the First Christian Church 502 E. Main St Hoopeston, with Rev. Christopher A. Layden officiating. Burial will be at Floral Hill Cemetery in Hoopeston, with military rites being accorded by the Hoopeston American Legion Post #384 and the Hoopeston VFW Buddy Egnew Post #4826. Memorials in Bill’s honor may be made to Carle Hospice 206 W. Anthony Dr. Champaign, IL 61822 or El Paso St. Jude Runners 303 E. First St El Paso, IL 61738.

William &#8220;Bill&#8221; DeWitt, 87, of Hoopeston, IL, passed away Saturday September 26, 2015 after suffering a stroke during surgery. Illness was no stranger to Bill; he was treated for cancer for twenty-one continuous years and developed... View Obituary & Service Information

The family of William "Bill" DeWitt created this Life Tributes page to make it easy to share your memories.

Send flowers to the DeWitt family.