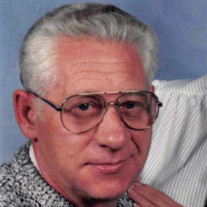 Wilbur E. “Bud” Warner Jr., 77, of Hoopeston, IL, passed this life to be rejoined with his wife Connie at 6:50 P.M. Tuesday March 29, 2016 at Carle Hoopeston Regional Health Center in Hoopeston. He was born on March 15, 1939 in Hoopeston, the son of Wilber and Viola (Robertson) Warner Sr. He married Connie Longfellow on July 8, 1961 in Hoopeston. She preceded him in death. He is survived by one daughter, Candis (Ron) Clayborn of Hoopeston, IL; two sons, Gilbert Warner and Eugene (Linda) Warner both of Hoopeston, IL; one sister, Joanne Catron of Sanford, FL ; five brothers, Jerry Warner of Hoopeston, IL, Art (Jeannie) Warner of Rockford, IL, Steve (Susan) Warner of Clovis, NM, Mike (Kim) Warner of Hoopeston, IL and Irvin Warner of Hoopeston, IL; two sisters-in-law, Charlene Warner of Hoopeston, IL and Karen Warner of Wellington, IL; one brother-in-law, Dale Catron of Florida; four grandchildren, Curtis (Holly) Warner, TJ (Rae Riesland) Warner, Kylee Warner and Nicholas Clayborn all of Hoopeston, IL; five great-grandchildren, Hunter, Emersyn, Beckett, Colten, and Dylan Warner, and several nieces and nephews. He was preceded in death by his parents; three sisters, Betty Horridge, Edith Catron and Ruthanna Bell; three brothers, Paul Warner, Bill Warner, and Hershel Warner and one brother-in-law, John Catron. Wilbur served in the United States Air Force, while serving he became a mechanic and worked on fighter jets and planes. Later, while back at home in 1968, he joined the Hoopeston Auxiliary Police Department after twenty-three years of service, attaining the rank of Lieutenant and receiving many awards as an accomplished sharp shooter, he retired. Wilbur also volunteered as a first responder. He was a past member of the Hoopeston Jaycees. He enjoyed playing cards, working out in the garage on all different projects, but mostly he loved working on cars and eating & talking about the good ole days. Wilbur also enjoyed bowling, especially when he went to the National Tournament with his two sons, Gilbert & Eugene and when he later went back to the tournament with Gilbert, Eugene, Linda, and Candis. He especially loved spending time with his family at family gatherings, watching his grandchildren and great-grandchildren during school activities and playing outside. A visitation will be held 11:00 A.M. – 1:00 P.M. Saturday April 2, 2016 at Anderson Funeral Home 427 E. Main St. Hoopeston, IL. The funeral service will follow the visitation at 1:00 P.M. at the funeral home with Mike Warner officiating. Per his wishes following the funeral service he will be cremated. Burial will be held 2:00 P.M. Wednesday April 6, 2016 at Floral Hill Cemetery in Hoopeston, with military rites being accorded by the Hoopeston American Legion Post #384 and the Hoopeston VFW Buddy Egnew Post #4826. Memorials may be made to the American Lung Association of Illinois 3000 Kelly Lane Springfield, IL 62711.

The family of Wilbur E. "Bud" Warner created this Life Tributes page to make it easy to share your memories.

Send flowers to the Warner family.