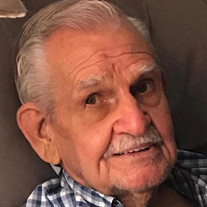 Wilbur LeRoy “Web” Carter, 92, of Hoopeston, IL, passed away at 7:50 A.M. Thursday November 11, 2021, at his residence at Autumn Fields Adult Community in Hoopeston. He was born May 27, 1929, at home in Hoopeston, the son of Albert and Gertrude Abigail “Abby” (Colvin) Carter. He married Betty June Carder on August 15, 1953, in Hoopeston. She preceded him in death on April 1, 2021. He is survived by two daughters, Jo Ellen (Ronald) Rife of Bedford, IN and Vickie Elaine (James) Means of Hoopeston, IL; one son, Wilbur Lynn Carter of Hoopeston, IL; four grandchildren, Christopher (Raelynn) Rife, Amanda Rife, Denelle Carter, and Mitchell (Geralyn) Means; eight great-grandchildren, Alexis (Seth) Sims, Kylie (Christina) Sabillón, Jayda Rife-Smith, Colton Rife, Paige Rife, and Addyson, Daley, and Gracelyn Means; and three great-great-grandchildren, Novic Rhodes, Sydney Sims, and Olivia Sims and one on the way. He is also survived by many nieces and nephews. In addition to his wife, Web was preceded in death by his parents; three sisters and four brothers and their spouses whom he lovingly adored; one great-grandson, Austin “AJ” Rhodes III; and several nieces and nephews. Web worked at American National Can in Hoopeston, which later became Silgan, as an industrial press mechanic for 39 years until his retirement. He served in the Korean War from January 1951 to October 1952 serving as a combat platoon leader. He earned the Korean Service Medal with three bronze stars for serving on the front lines. Web was a member of the First Church of God in Hoopeston to where he devoted many years of handyman service. He also served as a volunteer laborer building the Rossville American Legion and as a civic volunteer at the Hoopeston VFW and American Legion. He was an electrician, a master craftsman, and had an avid passion for yardwork. Web was a devoted family man who enjoyed spending time with his children and grandchildren. Visitation will be held 5:00 – 7:00 P.M. Tuesday November 16, 2021, at Anderson Funeral Home 427 E. Main St. Hoopeston, IL. The funeral service will be held at 11:00 A.M. Wednesday November 17, 2021, at the funeral home with an hour visitation prior to the service from 10:00 – 11:00 A.M. Burial will follow in Floral Hill Cemetery in Hoopeston with military rites being accorded by the Hoopeston American Legion Post #384. Memorials may be made to the Hoopeston Animal Rescue Team (H.A.R.T.) 901 W. Main St. Hoopeston, IL 60942 or DAV-Disabled American Veterans P.O. Box 14301, Cincinnati, OH 45250-0301.

The family of Wilbur LeRoy "Web" Carter created this Life Tributes page to make it easy to share your memories.