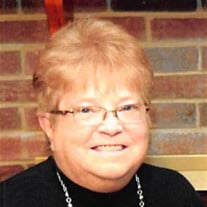 Wendy Lou Dunavan, 66, of Rossville, IL, passed away at 12:00 A.M. Sunday October 23, 2016 at Carle Foundation Hospital in Urbana, IL. She was born February 19, 1950, in Danville, IL, the daughter of Lyle and Leona (Kitchen) Marshall. She married Larry William Dunavan on June 7, 1969 in Rossville, IL. He survives in Rossville. She is survived by her mother, Leona Marshall of Rossville, IL; two sons, Jason (Victoria) Dunavan of Danville, IL and Michael (Stacey) Dunavan of Rossville, IL; one sister, Sheilla Lund of Rossville, IL; 6 grandchildren, Jerid, Danielle, Samantha and Sidney Dunavan, Brayden Pilkington and Brystal Butler and several loving nieces and nephews. She was preceded in death by her father; grandparents; brother-in-law, Harold Lund; beloved cousin, Harold Morgan; in-laws, Charles and Frances Dunavan and her beloved companions, Molly and Meika. Wendy worked as the secretary for Bob Harris at Harris Insurance for 39 years and later worked at the Vermilion County Circuit Clerk’s Office until her retirement. She was very active in the community and held positions at the American Legion Post 733 Auxiliary, the Rossville Women of Today and the Rossville Community Organization. She was also a member of the Junior Women’s Club, the Rossville Historical Society, and the Red Hat Society and attended the Rossville Church of Christ. Wendy enjoyed many hobbies including, cooking, baking and decorating cakes, sewing and making crafts. She also enjoyed going to yard sales, was a Maxine fan and never missed a ballgame that she could make. Wendy adored her grandkids and her three dogs and loved spending time with her family and friends. A visitation will be held 4:00 – 7:00 P.M. Wednesday October 26, 2016 at Anderson Funeral Home 427 E. Main St. Hoopeston, IL. The funeral service will be held at 11:00 A.M. Thursday October 27, 2016 at the funeral home, with Pastor James Blue officiating. Burial will follow in Mann’s Chapel Cemetery in rural Rossville, IL. In lieu of flowers, memorials may be made to the Rossville Ambulance Service P.O. Box 176 Rossville, IL 60963 or the American Kidney Fund 11921 Rockville Pike Suite 300 Rockville, MD 20852.

The family of Wendy Lou Dunavan created this Life Tributes page to make it easy to share your memories.

Send flowers to the Dunavan family.