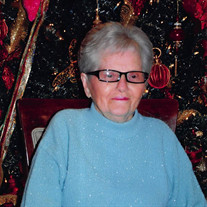 Wanita Monroney, 86, of Hoopeston, IL, passed away at 3:10 P.M. Friday February 5, 2016 at Heritage Health Therapy & Senior Living in Hoopeston. She was born on April 8, 1929 in Hymera, IN, the daughter of Clarence and Edith (Smith) Samm. They preceded her in death. She married Richard L. Monroney on June 12, 1948 in Hymera, IN. He preceded her in death. Wanita and Richard had four children, Linda Holloway of Jacksonville, FL, Karen (Oscar) Young of Hoopeston, IL, Sandy (Steve) Goldstein of Naples, FL and Rodney Monroney. Rodney preceded his mother in death. Wanita had five grandchildren, Oscar Young of Bloomington, IL, Richie (Sarah) Young of Eldridge, IA, Misti (Justin) Weiss of Settle, WA, Shannon Goldstein of Naples, FL and Eric Sumila. Eric preceded his grandmother in death. Wanita had six great-granddaughters, Bianca & Trinitee Young of Hymera, IN, Scarlett & Elora May Young of Eldridge, IA and Tatum & Kensie Weiss of Seattle, WA. She was also survived by two sisters, Margaret Yazel of Michigan City, IN and Wanda Bickel of Coalmont, IN; four brothers, Weldon (Alberta) Samm of Jasonville, IN, Larry (Judy) Samm of Terre Haute, IN, Carl (Ethel) Samm of Hymera, IN and Jack (Jane) Samm of Lakeville, IN; one brother-in-law, Dave Monroney of Littleton, CO. She was preceded in death by one sister, Janet Bradbury; three brothers, Hubert Samm, Bill Samm, and Basil Samm; two brothers-in-law, Everett Monroney and Marshall Monroney; three sisters-in-law, Janice Kulp, Claudia Glover, and Barbara Monroney. Wanita was a member of the VFW Women’s Auxiliary, Chestnut Street Church of Christ and also volunteered at the Hoopeston Nursing Home. She enjoyed playing yahtzee and scrabble with her children and grandchildren. She also liked playing euchre and watching the Chicago Cubs play baseball. Later when she moved into assisted living she loved to play Rubi cube with her best friend Marie Jones and her fellow residents. Wanita’s real passion in life was fishing. She would fish with anyone who would take her fishing as she would not go alone because she could not swim. Her sister Janet was her favorite fishing partner. Wanita always had a flower and vegetable garden and was quite good at canning and cooking. Per her wishes cremation rites will be accorded. A celebration of Wanita’s life will be held 10:30 A.M. – 12:00 P.M. Tuesday February 16, 2016 at Anderson Funeral Home 427 E. Main St. Hoopeston. Memorials may be made to Heritage Health Therapy & Senor Living 423 N. Dixie Hwy Hoopeston, IL 60942.

Wanita Monroney, 86, of Hoopeston, IL, passed away at 3:10 P.M. Friday February 5, 2016 at Heritage Health Therapy & Senior Living in Hoopeston. She was born on April 8, 1929 in Hymera, IN, the daughter of Clarence and Edith (Smith) Samm.... View Obituary & Service Information

The family of Wanita Monroney created this Life Tributes page to make it easy to share your memories.

Send flowers to the Monroney family.