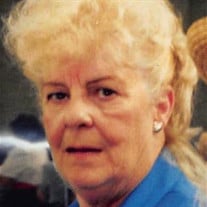 427 E. Main St. Hoopeston, IL Vivian F. Gillispie, 82, of Hoopeston, IL, passed away at 9:23 A.M. Thursday May 31, 2018, at her home in Hoopeston. She was born August 8, 1935, in Hoopeston, IL, the daughter of Donald Ervin and Vera (Olson) Williams. She is survived by two daughters, Suzanne (Don) Olszewski of Crown Point, IN, and Sheri L. Lau of Crown Point, IN; son-in-law, Ben Mitkus of Hoopeston, IL; 10 grandchildren, Danna, Tiffany, Scott, Joey, Tanya, Amanda, Julie, Bobby, Kimberly, and Sheri; 5 great-grandchildren, Tabitha, Alan, Alisha, Dylan, and Jordyan; one great-great-grandchild, Aryianna; and several nieces and nephews. She was preceded in death by her parents; one daughter, Vera Mitkus; one son, Edward Gillispie; one sister, Florence Ervin; and one brother, Don Ervin. Vivian retired from Electro Motive in McCook, IL and later worked as a bus driver. She served as the secretary of Union 179 Auto and the secretary of Local 330 Pace Drivers. She became a foster parent at age 75. Vivian enjoyed making crafts, flower arrangements, jewelry, and lamps. She also enjoyed cooking and making her own recipes and was a self-taught painter. A visitation will be held 11:00 A.M. – 1:00 P.M. Saturday June 9, 2018 at Anderson Funeral Home 427 E. Main St. Hoopeston, IL. A graveside service will follow the visitation and will be held at Floral Hill Cemetery in Hoopeston.

The family of Vivian Gillispie created this Life Tributes page to make it easy to share your memories.

Send flowers to the Gillispie family.