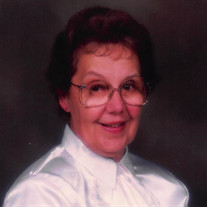 Virginia Sue “Susie” Morts, 91, of Rossville, IL, passed away at 7:50 P.M. Friday December 27, 2019 at Courtyard Estates of Monmouth in Monmouth, IL. She was born May 5, 1928, in Joliet, IL, the daughter of Donovan and Violet (Clemmons) Smith. She graduated from Rossville High School and worked as a secretary for a local garage. She married Lloyd William Morts on June 25, 1950 at the Rossville United Methodist Church in Rossville, and they celebrated 66 years together. He preceded her in death on April 2, 2016. She is survived by four daughters, Terry Alexander of Roseville, IL, Janet Glenn (Ron Kolacek) of Sun City, AZ, Nancy (Marvin) Turner of Veedersburg, IN, and Donna (Doug) Houmes of Vail, AZ; one son, William Lloyd “Billy” (Tammy) Morts of Fayetteville, GA; one sister, Alice Mann of Stonefort, IL; and 6 grandchildren, Jenny Real, Megan Glenn, Alexsha Alexander, Amanda Alexander, Cody Morts, and Tristen Morts. She was preceded in death by her parents; and one daughter, Judy Lynn. Known as Susie, she devoted her life to her family. In the mid-1970’s, she and her husband, Lloyd, started a small business, Morts Ice Cream Parlor. She was a member of the Rossville United Methodist Church and the American Legion Auxiliary. Susie loved being with her family, so she and Lloyd split time up, spending winters in Mesa, AZ and summers in Rossville, IL so they could be near family members in both places. A visitation will be held 11:00 A.M. – 1:00 P.M. Tuesday January 7, 2020 at Anderson Funeral Home 427 E. Main St. Hoopeston, IL. The funeral service will follow the visitation and will begin at 1:00 P.M. Tuesday at the funeral home, with Pastor Chris Quick officiating. Burial will follow in Rossville Cemetery. Memorials may be made in Susie’s honor to the Rossville Ambulance Service 107 W. Attica St., P.O. Box 176, Rossville, IL 60963 or the Rossville United Methodist Church 116 Maple St. Rossville, IL 60963.

The family of Virginia Sue "Susie" Morts created this Life Tributes page to make it easy to share your memories.

Send flowers to the Morts family.