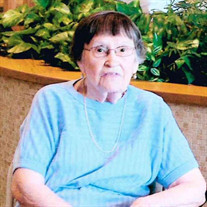 Virginia Grace Hatfield, 91, of Hoopeston, IL, passed away quietly in her sleep on Tuesday, January 12, 2016 at Paxton Rehab and Healthcare in Paxton, IL. She was born September 13, 1924, in Bismarck, IL, the daughter of Otis Earl and Cora Mae (Tanner) Brown. She married Francis Ronald Hatfield on June 11, 1943 in Bismarck, IL. He preceded her in death in 1988. “Granny” as she was known is survived by one son, Walter (Linda) Hatfield of Champaign; two granddaughters, Wendy (Art) Jeffries of Hoopeston and Suellyn (Ron) Boastick of Champaign; two grandsons, Ronald (Brenda) Dunavan of Hoopeston and Richard Dunavan of Lewisport, KY; one great-granddaughter, Emily Dunavan of Hoopeston; five great-grandsons, Jason Jeffries of Danville, Justin Jeffries of Hoopeston, Joshua Dunavan of Hoopeston, Michael Dunavan of Lewisport, KY and Parker Boastick of Champaign. She is also survived by one sister, Freda Walter of Danville; one son-in-law, Chuck Dunavan of Hoopeston and many beloved nieces and nephews. She was preceded in death by her parents; one daughter, Nancy (Hatfield) Dunavan; two sisters, LaVerne Rollins and Louise Tribbey; three brothers, Elwood, Earl and Wayne Brown; infant sons and one granddaughter-in-law, Amy Dunavan. Virginia was employed by several manufacturing companies, but her favorite job was working as a sales clerk at Searle Jewelers in Hoopeston. She was a member of the First Christian Church Disciples of Christ in Hoopeston and was also a member of the Hoopeston American Legion Auxiliary. Virginia enjoyed playing cards, going for walks and drinking coffee with the girls. The visitation will be held 10:00 – 11:00 A.M. on Friday January 15, 2016 at Anderson Funeral Home 427 E. Main St. Hoopeston, IL. The funeral service will follow the visitation and will begin at 11:00 A.M. on Friday January 15, 2016 at the funeral home, with Rev. Thomas Cici officiating. Burial will follow in the Floral Hill Cemetery in Hoopeston. In lieu of flowers, the family requests that memorials be made to The Breast Cancer Care Center Presence United Samaritans Medical Center 806 North Logan Avenue Danville, IL 61832 or any Alzheimer’s or memory care charity of the donor’s choice.

Virginia Grace Hatfield, 91, of Hoopeston, IL, passed away quietly in her sleep on Tuesday, January 12, 2016 at Paxton Rehab and Healthcare in Paxton, IL. She was born September 13, 1924, in Bismarck, IL, the daughter of Otis Earl and Cora... View Obituary & Service Information

The family of Virginia Grace Hatfield created this Life Tributes page to make it easy to share your memories.

Send flowers to the Hatfield family.