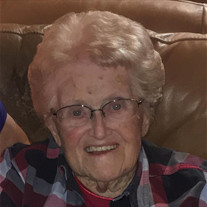 Viola F. “Sis” (Queen) Fetters, 90, of Hoopeston, IL, formerly of Rossville, IL, passed away at 11:38 P.M., Monday, May 17, 2021 at the Carle Foundation Hospital in Urbana, IL. Viola was born February 7, 1931, in Harvey, IL, the daughter of Oliver and Edith (Davis) Queen. She married Floyd Fetters on April 6, 1948 in Watseka, IL. He preceded her in death. Viola is survived by one daughter, Jean Peters (Dave Haworth) of Mattoon, IL; one daughter-in-law, Lynne Fetters of Germantown Hills, IL; one sister, Creta Davis of Lumberton, NC; three brothers, Danny (Ingrid) Queen of Manchester, NJ, Richard “Dick” (DeAnn) Queen of Rossville, IL, and David (Dwyla) Queen of Danville, IL,; four grandchildren, Judie Summarell of Franklin, TN, Jerod (Betsy) Peters of Hoopeston, IL, Ryan (Kate) Fetters of Germantown Hills, IL, and Megan Fetters (Nathan Behl) of Goodfield, IL; nine great grandchildren, Katlin, Ashley, and Lindsey Summarell, Jacob, Aubrey, and Jadyn Peters, Matthew and Sarah Fetters, and McKenna Fetters along with several nieces and nephews. She was preceded in death by her parents, son, John, two sisters, Elsie and Betty and two brothers, Eldon and Melvin. Viola worked at TRW in Hoopeston before becoming a bookkeeper at the Bank of Rossville for thirty years. She was a member of the Rossville Church of Christ, the American Legion Women’s Auxiliary, the Red Hat Society, and the Rossville Community Organization (RCO). She was an election judge for many years. Viola enjoyed sewing, making kids costumes, traveling, baking pies, playing cards and dominoes, and doing jigsaw puzzles. Most of all she enjoyed spending time with her family. The family would like to give a special thank you to the caregivers for all of the care and love that they gave to Viola throughout the past few years. A visitation will be held 1:00 – 3:00 P.M. Saturday, May 22, 2021 at Anderson Funeral Home 427 E. Main St. Hoopeston, IL. The Funeral Service will follow the visitation and begin at 3:00 P.M. with Pastor Kevin Purdy officiating. Burial will follow the service at the Rossville Cemetery in Rossville, IL. Memorials may be made to the Rossville Church of Christ or the Donor’s Choice.

The family of Viola "Sis" (Queen) Fetters created this Life Tributes page to make it easy to share your memories.