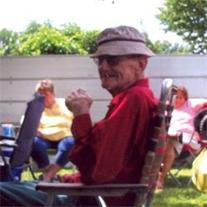 Vernon Franklin Fink, 89, of Hoopeston, IL, passed away at 9:31 A.M. Monday, July 9, 2012, at his home. He was born July 19, 1922 in Attica, IN, the son of Andrew and Lacie (Solomon) Fink. He married Marjorie Sides on July 3, 1946 in Champaign, IL. She preceded him in death. He is survived by two daughters, Joy Koehler of Hayes, VA and Darla Crawford of Hoopeston, IL; four sons, Robert (Teresa) Fink of Terry, MS, Vernon (Roberta) Fink of West Lebanon, IN, Marty Fink of Tuscon, AZ, Kevin (Connie) Fink of Hoopeston, IL; daughter- in-law Carolyn Carswell; 22 grandchildren, several great-grandchildren and many nieces and nephews. He was preceded in death by his parents, one brother, one sister, two sons George "Bud" Carswell and Tracy Lee Fink and three grandchildren. Vernon served in the United States Navy during World War II. He later worked at John Deere in Hoopeston, IL, which later became Vermilion Iron. He coached youth football and little league for many years, was a past President of the AIW Union at John Deere and was a past Commander of the Hoopeston VFW Post #4826. Vernon enjoyed playing bingo, gardening, camping, golfing, playing pool and getting together with family and friends.

The family of Vernon Fink created this Life Tributes page to make it easy to share your memories.