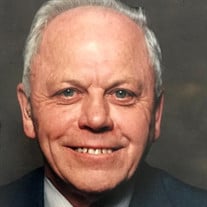 Vader L. Clements, 95, of Springfield, IL, passed away at 12:40 A.M. Wednesday November 18, 2020 at Washington Senior Living in Washington, IL. He was born April 15, 1925 in Springfield, IL, the son of John and Barbara (Adair) Clements. He married LeMoyn M. Foxworthy on October 8, 1946 at the First Presbyterian Church of Hoopeston. She preceded him in death on June 15, 1996. He is survived by one daughter, Sharon Maurer of Peoria, IL; two grandchildren, Tammy (Derek) Anderson and James (Allison) Maurer; and five great-grandchildren, Ethan, Simon, and Haven Ammerman and Emmett and Miles Maurer. In addition to his wife, LeMoyn, Vader was preceded in death by his parents; three sisters; three brothers; one infant brother; and son-in-law, Richard Maurer. Vader was employed at American National Can in Hoopeston for 38 years, working in several different departments until his retirement in 1982. He became a member of the First Presbyterian Church of Hoopeston in 1959 and had previously served as Deacon, Elder, Clerk of Session, and other capacities. He and his wife, LeMoyn, were faithful Christian people in Christ and the church. In 1962 he became a member of the Star Lodge #709 A.F. & A.M. Illinois Masons. He served as a past Master of the lodge and also a member of the Danville Consistory Class of Challenge in spring of 1968, a 32 degree mason. Vader’s hobbies included carpentry (woodwork), flowers, shrubbery, trees, and gardening most of his life. He also enjoyed reading his Bible and believed in the teachings of the wisdom of God. A graveside service will be held at 12:00 pm on Monday, November 23, 2020 at Floral Hill Cemetery in Hoopeston with Rev. Wade Meranda officiating. Memorials in Vader’s memory may be made to the Hoopeston Presbyterian Church 915 E. Orange St. Hoopeston, IL 60942.

The family of Vader L. Clements created this Life Tributes page to make it easy to share your memories.

Send flowers to the Clements family.