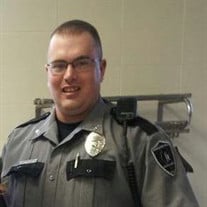 Travis Alan McCalla, 33, of Hoopeston, IL, passed away at 7:24 A.M. Monday December 7, 2015 at his home in Hoopeston. He was born September 9, 1982 in Danville, IL, the son of Jim McCalla and Mardenna Beauvois. They both survive in Hoopeston. He is also survived his brother, Andy Michael McCalla of Morgantown, WV; one nephew, Maximus Bear McCalla of Morgantown, WV; four aunts, Michelle Talbott, Sandy Hughes, Linda Lockhart, and Janie Adams and two uncles, Terry (Jo) Beauvois and Dan McCalla. He was preceded in death by his grandparents, Orville & Doris McCalla Sr. and Oscar & Margaret Beauvois; two aunts, Judy Burton and Donna Baughman and two uncles, Dick McCalla and Jon McCalla. Travis worked as a pipe fitter for the Terre Haute Plumbers & Steamfitters Local Union 157 and most recently he worked as a Mechanic at Silgan Containers in Hoopeston. He had a passion for serving as an Auxiliary Police Officer in Hoopeston, which he has served since 2009. Travis enjoyed fishing, shooting his guns, and working out with his friend Chris Kelnhofer. He especially loved spending time with his friends and family. Travis will always be remembered by his contagious smile. He will be missed dearly. A visitation will be held 4:00 P.M. – 7:00 P.M. Thursday December 10, 2015 at Anderson Funeral Home 427 E Main St. Hoopeston. The funeral service will be held at 11:00 A.M. Friday December 11, 2015 at the funeral home, with Pastor Micah Mobley officiating. Burial will be in the Floral Hill Cemetery in Hoopeston. Memorials may be made in Travis’ memory to the Hoopeston Auxiliary Police Dept. Explorers Post 51 301 W. Main St. Hoopeston, IL 60942. Anderson Funeral Home in Hoopeston is handling the arrangements.

Travis Alan McCalla, 33, of Hoopeston, IL, passed away at 7:24 A.M. Monday December 7, 2015 at his home in Hoopeston. He was born September 9, 1982 in Danville, IL, the son of Jim McCalla and Mardenna Beauvois. They both survive in Hoopeston.... View Obituary & Service Information

The family of Travis Alan McCalla created this Life Tributes page to make it easy to share your memories.

Send flowers to the McCalla family.