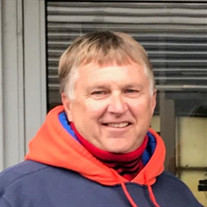 Tony L. Johnson, 57, of Wellington, IL., passed away at 10:54 A.M. Monday June 26, 2017 at his home in Wellington, IL. He was born September 29, 1959, in Danville, IL, the son of Howard and Myrna (McNeely) Johnson. He married Ava Neathery on September 17, 1983, in Hoopeston. She survives in Wellington. He is survived by two sons, Tyler Lee Johnson (Jessica VanDerWal) of South Elgin, IL and Stewart Fulton Johnson of Hoopeston, IL; his parents of Hoopeston, IL; his mother-in-law, Ruth Neathery of Hoopeston, IL; two brothers, Greg (Kimberly) Johnson of Danville, IL and Daniel (Sarah) Johnson of Birmingham, MI; three sisters-in-law, Jill (Brian) Bell of Naples, FL, Pami Patterson of Hoopeston, IL and Tami Crawford of Hoopeston, IL; 15 nieces and nephews and 7 great nieces and nephews. He was preceded in death by his grandparents, his father-in-law, Jack Neathery, and two brothers-in-law, Robin Neathery and Marvin Crawford. For several years, Tony worked at FMC until its closing. He then went to work for Silver Bros. Construction. For the last several years, he was the owner of Johnson Concrete Work. Tony was a member of the First Christian Church Disciples of Christ in Hoopeston, but attended the Milford Christian Church. He enjoyed fishing, camping, drawing, and going to concerts and hanging out with his friends. He was always there for his boys and his family. A visitation will be held 3:00 P.M. – 7:00 P.M. Friday June 30, 2017 at Anderson Funeral Home 427 E. Main St. Hoopeston, IL. The funeral service will be held at 11:00 A.M. Saturday July 1, 2017 at the funeral home with Pastor Brent Zastrow and Pastor Gary Milton officiating. Burial will be at Floral Hill Cemetery in Hoopeston. In lieu of flowers, memorials may be made to the Stockland Gym Maintenance and to the Wellington-Greer Fire Department.

The family of Tony Lee Johnson created this Life Tributes page to make it easy to share your memories.