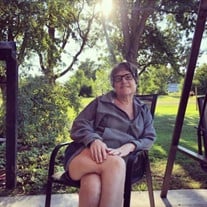 Tina Marie Dove, 56, of Wellington, IL passed away at 1:57 P.M. at her home surrounded by her loved ones. She was born June 17, 1964 in Chicago, IL, the daughter of Oscar and Anita (Johnson) Bond. She married James Dove on September 26, 1986. He survives her. Tina is also survived by her mother, Anita Bond; son, Robert Dove & his significant other Alison Torres of Avon, IN; daughters, Laura and Dani Lane of Hoopeston, IL, and Jill and Brandon Hudson of Danville, IL ; brother, Wayne and Joyce Bond of Lockport, IL; sister, Donna Bond of Mokena, IL; grandchildren, Emmett, Tucker, Knox, Hayden, Adaline, Grant, Jed, and one on the way; and many nieces and nephews. She was preceded in death by her father, Oscar; and her brother, Robert Bond. Tina was a stay-at-home mom. She was a great mom, wife, and grandma. Her grandchildren brought her so much joy. She was a genuine person who always had a smile on her face and was always thinking about others. Tina was an avid White Sox fan. She enjoyed playing softball, loved drinking coffee every morning and was arguably the best sandwich maker. Memorials in Tina’s name can be made to the family. Per her wishes, cremation rites have been accorded. A Celebration of Life will be held at a later date.

The family of Tina Marie Dove created this Life Tributes page to make it easy to share your memories.

Send flowers to the Dove family.