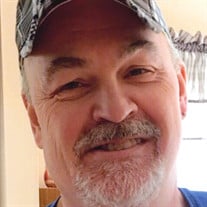 Thomas Earl Ritter, 55, of Rossville, IL, passed away on Wednesday January 26, 2022, at home with his wife, daughters, and sister by his side, after fighting a courageous battle against cancer related illness. Tom “Tommy” was born on May 30, 1966, in Prince Frederick, MD, to Lewis Howard and Kay (Thomas) Ritter. He attended Rossville-Alvin schools, graduating in 1984. Having intended to enlist in the Marine Corps., his plans changed after re-uniting with his high school sweetheart, Tammie Moore. Tom and Tammie were married on June 27, 1987. They have two daughters, Kelsey Nicole Ritter and Hannah Beth Ritter. Preceding Tom in death were his father, Lewis Ritter and brother, Bill Ritter. He is survived by his mother, wife, daughters, sister, Nyla LaMar, sister-in-law, Kathy (Greg) Jones, and several nieces and nephews. Tom retired in June 2016 after working at the Danville Correctional Center for 31 years. While there, he made many lasting friendships and was admired for his laid-back demeanor, sense of humor, his stories, laugh, honesty and his old-school values. In addition to being a genuine friend, Tom expressed his loyalty and great love for his family as a faithful and devoted husband, father, son, and brother. Over the years, Tom enjoyed attending Nascar races, St. Louis Cardinals games, and rooting for the Indianapolis Colts. However, he had reservations about Tammie’s infatuation with Jeff Gordon and Jim Edmonds, and the Colts’ secondary! He loved taking Tammie and the girls on family vacations and riding his Harley. Per his wishes, he will be cremated. A visitation will be held 4:00 – 7:00 P.M. Friday February 4, 2022, at Anderson Funeral Home 427 E. Main St. Hoopeston, IL. The memorial service will be held at 1:00 P.M. Saturday February 5, 2022, at the Rossville Church of Christ, 514 E. Attica St. Rossville, IL, with Pastor Kevin Purdy officiating. No burial will be held. Memorial contributions may be made to the Rossville Community Ambulance Service or Hospice Hearts Animal Rescue PO Box 17605, Urbana, IL 61803.

Thomas Earl Ritter, 55, of Rossville, IL, passed away on Wednesday January 26, 2022, at home with his wife, daughters, and sister by his side, after fighting a courageous battle against cancer related illness. Tom &#8220;Tommy&#8221; was born... View Obituary & Service Information

The family of Thomas Earl Ritter created this Life Tributes page to make it easy to share your memories.

Thomas Earl Ritter, 55, of Rossville, IL, passed away on Wednesday...

Send flowers to the Ritter family.