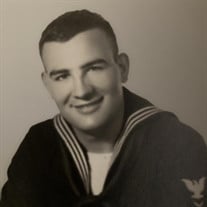 Thomas William “Tom” Evans, 80, passed away at 6:58 A.M. Friday, June 10, 2022, at Carle Foundation Hospital in Urbana, IL. He was born April 29, 1942, the son of Thomas Everett Evans and Frances Almeda Hocutt Evans. He married Emily Elizabeth Olive and they raised three daughters before they later divorced. Tom is survived by his three daughters, Kathleen (Philip) Vines and Kristi (Scott) Hudson both of Hoopeston; and Karen (James) Guglielmo of St. Peters, MO. He is also survived by one sister, Donna Fleming, of Des Moines, IA; nine grandchildren, Evan Vines, Kelsey Vines, Jo Vines, Emma Vines, Matthew Vines, Samuel Hudson, Sean Hudson, Dominic Guglielmo and Vito Guglielmo; and nieces and nephews, Jay Evans, Cindy Evans, Dee Evans, Bill Leemon, Linda Gilman, and Steve Berry. He was preceded in death by his parents, two brothers, Floyd Evans and Kenneth Evans, and one sister, Eileen Leemon. Tom worked at UARCO in Watseka and American Can Company in Hoopeston for years before retiring. He served in the US Naval Reserves and US Navy for eight years during the Cuban Missile Crisis era as a Yeoman with stations on the USS Kennebec and in San Diego, Hawaii, and Newport, RI. Tom loved the routine and order of the Navy. Tom was a life – long Yankee and Cubs fan and enjoyed following the Fighting Illini. He was very proud that all three daughters chose to attend the U of I. He inherited his father’s green thumb and loved to garden – typically starting all his vegetables from seed. His daughters remember being quizzed on the names of flowers as we would tour the gardens. Though Tom was not a social person, when he did get out, he enjoyed talking to people. He took a great amount of pride that all of his daughters had achieved a college education and were independent thinkers. Tom was very proud of all of his grandchildren, not just in their achievements and accomplishments, but mostly in the good people that they are growing up to be. Tom would have also wanted it known that he would be leaving behind an animal companion, Kellogg, his sweet cat. For anyone moved to do so, you may choose to make a memorial donation to the Hoopeston Animal Rescue Team so that other precious companions like Kellogg can be saved. As per his wishes, he will be cremated and no services will be held.

The family of Thomas W. Evans created this Life Tributes page to make it easy to share your memories.

Send flowers to the Evans family.