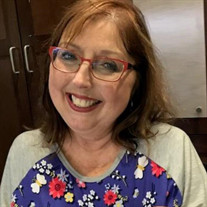 1 Corinthians 15:55 - “Where, O death, is your victory? Where, O death, is your sting?” Heaven is celebrating as Susan Lynne Ziebart was healed from all her earthly pain in the early morning of Tuesday, December 28th, 2021. She was welcomed home by her dad, Charlie Johnson, her favorite gram, Martha Stefaniak, and two very special friends, Sandy Hardy and Judy Nardoni. She will be dearly missed by Rich (the hubby), Lindsay (the favorite daughter), Brady (the son she chose), Carol (the mother), Shavon (the little sister whom she fought with all the time but later grew so close to), Boyd and Aspyn (the grandbabies that were Gigi’s pride and joy), Drew P (the favorite nephew), Jamie (the treasured niece), Paul (the special father-in-law), extended family, and close church friends. But they have hope that they will be reunited with her at a later date. Susan was born October 24, 1963. She grew up in Burnettsville, IN and was a 1982 graduate of Twin Lakes High School in Monticello, IN. She worked her summers at Indiana Beach. She went to college at Ozark Bible College in Joplin, MO where she earned her MRS. Degree (as she would always say). On April 13, 1985, she married the farmer, Rich Ziebart. Throughout their 36 years of marriage, they showed their kids and the world what the true meaning of “in sickness and in health” meant. In the early years of Susan’s marriage, she lived in rural Covington, IN, where she and her husband farmed and raised hogs (well... she tolerated them). She attended First Church of Christ in Covington, IN, where she and her husband were youth group sponsors and led a puppet ministry that travelled all over the place. In 1992, she moved to her husband’s family farm in rural Wellington, IL where she helped pull wagons, drive tractors, and take meals out to the field. She also began attending Antioch Church of Christ where she and her husband were also youth group sponsors. It was there where she met her special friends, Todd and Tonja Hancock. In the fall of 1992, her pride and joy of a daughter, Lindsay, was born. The two of them would grow to have such a unique bond. Susan and her husband became foster parents and adopted their son, Brady, in 2007. In the early 2000’s, Susan and her family began attending Second Church of Christ in Danville, IL where she and her family served for 22 years. Recently, she and her family were attending Hoopeston First Church of God. If you knew Susan at all, you knew she was an avid shopper, a lover of all thing's bling and pink, and shoes... oh the shoes! She loved playing Phase 10 (until she lost...then you had better watch out because she would throw the cards). She enjoyed scrolling on Facebook for hours upon hours, chatting with old friends and new ones. Susan loved the beach and going on many vacations that included, trips to Mexico to visit Todd and Tonja Hancock, trips to visit family in Joplin, MO, and trips to visit her sister in Texas. One of her favorite pastimes was taking Sunday afternoon drives (after church and lunch) down to Parke County Indiana and stopping at Andi Mae’s in Bismarck, IL for some Passionfruit Italian Ice. Most of all, Susan loved spending time with her adorable and angelic grandbabies. She also dearly loved her cat, Lily (her husband does not). Throughout her life, she struggled with Rheumatoid Arthritis, had numerous surgeries and joint replacements, survived a severe case of Necrotizing Fasciitis, and in July of 2021, she survived, what should have been, a fatal car wreck. The Devil tried many times to knock Susan down and try to have her faith wither away (the Job episodes as her daughter would say), but he couldn’t keep her because she always belonged to Jesus. 1 Corinthians 15:57 - “But thanks be to God! He gives us the victory through our Lord Jesus Christ.” A time of celebration, full of laughter and memories, will be held from 3:00 P.M. - 7:00 P.M. CST Thursday, January 6, 2022, at Anderson Funeral Home 427 E. Main St. Hoopeston, IL. A private graveside celebration with be held by her dear friend Todd Hancock. Susan was so proud of her grandbabies. Boyd would be so excited to show her the latest craft he had made at preschool. She also enjoyed supporting the fundraisers so that Boyd could be the top selling preschooler. With that being said, we knew she would want memorials made to Boyd’s preschool. Memorials may be made to Learn & Lead Academy 409 W. Washington St., Hoopeston, IL 60942. We know this would put such a smile on her face. Philippians 4:13 - “I can do all things through Christ who gives me strength.”

The family of Susan Lynne Ziebart created this Life Tributes page to make it easy to share your memories.

Send flowers to the Ziebart family.