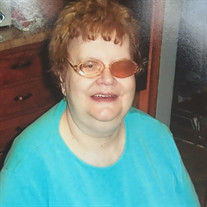 Susan "Susie" Elizabeth Eells, 65, of Mattoon, formerly of Hoopeston, IL, passed away on August 1st in Champaign, IL. Susie was born in Danville, Illinois to Edson and Phyllis Eells on September 24th, 1953. She graduated from Hoopeston High School in 1971 and attended DACC. She was a member of the Hoopeston United Methodist Church and when she was able, loved singing in the church choir. She was also a member of the Barbara Standish Chapter of DAR. She loved music, reading, collecting Betty Boop memorabilia and Pegasus and of course like all of the Eells’ was a big IU Hoosier fan. She had spent the last several years at Palm Terrace in Mattoon and thought of that as her second home. She is survived by one sister, Nancy (Bill) Jenkins; two brothers, Scott (Megan) Eells and Kevin Eells; nieces and nephews, Scottie, Sara, Rob (Jacquie), Jake (Desarae), Victoria, Avalon, Aaliya and Michael and several aunts, uncles and cousins. Susie was preceded in death by her parents. Visitation will be held 11:00 A.M. – 12:00 P.M. Saturday August 10, 2019 at Anderson Funeral Home 427 E. Main St. Hoopeston, IL. A memorial service will be held at 12:00 P.M. following the visitation at Anderson Funeral Home with the Pastor Richard Lewis officiating. Burial will follow at Amity Cemetery in Goodwine, IL. Memorials may be given to Hoopeston United Methodist Church 403 E. Main St. Hoopeston, IL 60942. The family of Susie wishes to extend our sincere thanks to Carle Hospital, Palm Terrace and Amy Bruens who has been Susie’s angel and her rock.

The family of Susan "Susie" Eells created this Life Tributes page to make it easy to share your memories.

Send flowers to the Eells family.