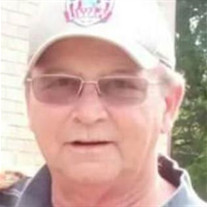 Steven Alan “Squire” Rhodes, 62, of Hoopeston, IL, passed away at 1:42 p.m. Thursday November 29, 2018 at OSF Heart of Mary Medical Center in Urbana, IL. He was born December 5, 1955 in Danville, IL, the son of Donald J. and Eunice (Dietel) Rhodes. He married Sara Ann Fourez on November 9, 1997 at the No. 10 Church of Christ. She survives in Hoopeston. He is also survived by two daughters, Christine Rhodes of Daytona Beach, FL and Amy Buttram of East Lynn, IL; two sisters, Sharon (Ron) Lacey of Hoopeston, IL and Deb (David) Nosler of Hoopeston, IL; two grandchildren, Justin Rhodes and Anna Rhodes; and several nieces and nephews. He was preceded in death by his parents. Steve worked for Burl Hall at Hall’s Shell Service Station and later for Cliff Baldwin at Baldwin’s Standard Gas Station. He began working for the City of Hoopeston on April 18, 1988, where he served as the Cemetery Sexton for 30 years. He volunteered at the HART Shelter and the Hoopeston VFW. Steve enjoyed golfing, bowling, gardening, and camping. He also enjoyed hunting, fishing, watching Nascar, and most of all, cruising with his fur-girl, Roxie. A visitation will be held 4:00 – 7:00 P.M. Tuesday December 4, 2018 at Anderson Funeral Home 427 E. Main St. Hoopeston, IL. The funeral service will be held at 11:00 AM Wednesday December 5, 2018 at the funeral home, with Dave Rhodes officiating. Burial will follow in Floral Hill Cemetery in Hoopeston. Memorials may be made in Steve’s memory to the HART Shelter 901 W. Main St, Hoopeston, IL 60942 or the VFW Buddy Egnew Post #4826, 428 W. Orange St. Hoopeston, IL 60942.

The family of Steven Alan "Squire" Rhodes created this Life Tributes page to make it easy to share your memories.

Send flowers to the Rhodes family.