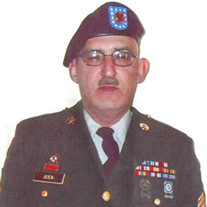 Stephen B. Boen, 62, of Rossville, IL, passed away at 1:55 A.M. Tuesday, December 29, 2020 at Carle Hoopeston Regional Health Center. He was born January 24, 1958, in Danville, IL, the son of Ray and Amy (Roe) Boen. He married Tammy Swartz on March 7, 1981 at the Rossville United Methodist Church. She preceded him in death. In addition to his wife of 38 years, Stephen was also preceded in death by his father, Ray. He is survived by two sons, Steve (Heather) Boen of Westville, IL and Chris (Kristin) Boen of Rossville, IL; one sister, Christina Boen of Alvin, IL; one granddaughter, Hadley Rae Boen; two nieces, Nickole Swartz and Angie Strawser; and one nephew, Robert Tubbs. Stephen served in the United States military for 27 years. He served in the Marine Reserves for 7 years and ARMY Active Duty for 20 years before retiring after serving in Iraq. He later worked at McLane Midwest for over 20 years. Stephen’s greatest enjoyment was spending time with his family. A graveside service will be held at 10:00 A.M. Saturday, January 2, 2021 at Bethel Cemetery in rural Alvin, IL, with Pastor Dan Mikel officiating. We kindly ask that face coverings be worn, and social distancing is maintained by those who attend the service. Memorials may be made to the Disabled Veterans National Foundation 4601 Forbes Blvd-Suite #130, Lanham, MD 20706 or the American Cancer Society 2509 S Neil St Ste 1, Champaign, IL 61820. Please visit www.anderson-funeral-home.com to view Stephen’s eternal tribute page and to send the family condolences. Anderson Funeral Home in Hoopeston is handling the arrangements.

The family of Stephen Bradley Boen created this Life Tributes page to make it easy to share your memories.

Send flowers to the Boen family.