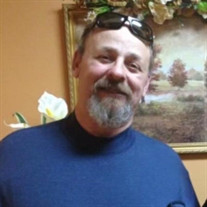 Stanley William Inman, 61, of Hoopeston, IL, passed away at 10:00 A.M. Monday April 18, 2022, at his home. He was born January 16, 1961, in Danville, IL, the son of Kenny and Ruby (Hoover) Inman. He married Terri Jo Allen on November 21, 1990, in Watseka, IL. She survives in Hoopeston. He is also survived by two sons, Corey Inman of Jacksonville, IL and Cody (Jessica) Inman of Potomac, IL; one brother, Bruce Inman (Charlene Slaughter) of Hoopeston, IL; one sister, Debbie (Joe) Castillo of Hoopeston, IL; five grandchildren, Delaney, Rosie, Ivy, Easton, and Michael Inman; and several nieces and nephews. He was preceded in death by his parents; one sister, Sherrill Contreras; and one brother, Donald Inman, Sr. Stan was a maintenance mechanic at Eagle Wings and Hoopeston Foods. He also owned and operated Stan’s Small Engine Repair in Hoopeston. He served as a coach for several different sports while his boys were growing up and helped build the playground in Wellington. Stan enjoyed racing with his sons, watching the Chicago Cubs and Indiana Hoosiers, fishing, and watching his grandchildren play sports. Cremation rites will be accorded, and a visitation will be held 5:00 – 7:00 P.M. Thursday April 28, 2022, at Anderson Funeral Home 427 E. Main St. Hoopeston, IL. A graveside service will be held at 11:00 A.M. Friday April 29, 2022, at Floral Hill Cemetery in Hoopeston, with Pastor Carlos Sanchez officiating. Memorials may be made to the donor’s choice.

The family of Stanley William Inman created this Life Tributes page to make it easy to share your memories.

Send flowers to the Inman family.