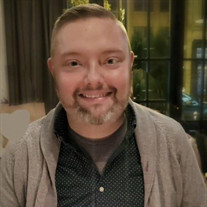 Stacy Kloth, 35, of Rossville, IL, passed away at 11:20 A.M. Wednesday February 16, 2022, surrounded by his loved ones. He was born November 5, 1986, in Sparta, IL, the son of Dennis and Nancy (Fletcher) Kloth. He married Rachel Mikel on October 3, 2009, at Mann’s Chapel in rural Rossville. She survives in Rossville. He is also survived by his father, Dennis Kloth of Campbell Hill, IL; three children, Elliott, Violet, and Everett; a half-sister, Robin Puckett of Hillsboro, IL; his mother-in-law and father-in-law, Dan and Melissa Mikel of Rossville, IL; two sisters-in-law, Anna (Jason) Grace and Rebekah Mikel; one brother-in-law, Sam Mikel (Jessica Heaton); six nieces and nephews, Jordan, Amara, Mason, Ella, Camila, and Roman; a lifelong friend, Doug Bitner; and several aunts, uncles, and cousins including his close cousins Jamie and Tad and special aunts Kim (Kenny), Kathy (Allen), and Angie, and his uncle Steve. Stacy’s family was so important to him. He was preceded in death by his mother, Nancy and his grandparents. Stacy was the Vice President of Production at WorkSource in Danville for seven years. He earned a bachelor’s degree from Greenville University. He attended Morning Star Church in Rossville. He was a great man of faith and loved to serve others. He was an avid baseball fan, and his bucket list included attending a baseball game at every Major League Baseball Park. He also coached baseball and was a board member for the Rossville Youth Baseball League. Stacy enjoyed cooking, trying new restaurants, and traveling. He especially enjoyed playing sports with his kids and spending time with them, as they were everything to him. Cremation rites will be accorded. A visitation will be held 2:00 – 4:00 P.M. Monday February 21, 2022, at Morning Star Church, 201 N. Chicago St., Rossville, IL. A memorial service will follow the visitation and will begin at 4:00 P.M. Monday at the church, with Pastor Dan Mikel officiating. Burial will be held at a later date. Memorial donations may be made to the Morning Star Church Youth Program, 201 N. Chicago St. Rossville, IL 60963.

Stacy Kloth, 35, of Rossville, IL, passed away at 11:20 A.M. Wednesday February 16, 2022, surrounded by his loved ones. He was born November 5, 1986, in Sparta, IL, the son of Dennis and Nancy (Fletcher) Kloth. He married Rachel Mikel on October... View Obituary & Service Information

The family of Stacy Kloth created this Life Tributes page to make it easy to share your memories.

Send flowers to the Kloth family.