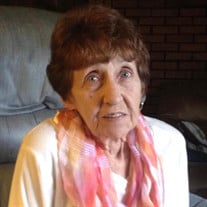 Shirley Jean Miller, 77, of Hoopeston, IL, passed away at 2:28 A.M. Thursday, April 23, 2020 at her home. She was born on July 15, 1942 in Prairie Green Twp, IL, the daughter of Thomas and Julie (Wiseman) Crawford. She married Jerry Miller on October 11, 1966 in Watseka, IL. He survives in Hoopeston, IL. She is also survived by one son, Jerry (Kristi) Miller Jr. of Murphysboro, IL; one daughter, Shannon (Curtis) Tidwell of Bartlett, TN; one brother-in-law, Wayne Carter; three grandchildren, Chelsy Tidwell-Afzal (Shah Afzal), Kyle Miller, and Braden Miller; niece, Cassy Carter; and nephews, Wayne Carter and Bill Patterson. She was preceded in death by her parents; two sisters, Carol Knecht and Janet Carter; and one brother, Phil Crawford. Shirley was a homemaker for most of her life and worked as a cashier at IGA. Her hobbies included gambling, but most of all she enjoyed spending time with her family. Due to the current health concerns, a private family graveside service will be held on Saturday, April 25, 2020 at Floral Hill Cemetery in Hoopeston. Friends and extended family are encouraged to line North Market Street at 10:45 A.M. Saturday, April 25, 2020 to greet the family as they proceed to the graveside rites. Memorials may be made to Carle Hospice.

The family of Shirley Jean Miller created this Life Tributes page to make it easy to share your memories.