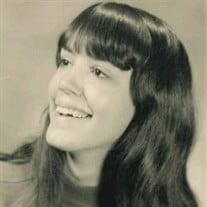 Shelly Ann (Franklin) Henson, 66, of Hoopeston passed away on February 6, 2021 at Carle in Urbana surrounded by family. Shelly died from natural causes after a brave battle with rheumatoid arthritis, which she fought for over 40 years. Shelly was born on April 1, 1954 in Traverse City, MI, to Carl E. and Mary Ann (Hoag) Franklin. Both preceded her in death. She is survived by her sister, Jan (Larry) German, nephew Andrew, and niece Elizabeth, all of Normal, IL. Shelly was assisted in recent years by her friends Mary, Angie, Marlo, and Ivy. As a young adult, Shelly enjoyed spending time in nature, including camping. She spent a lot of time visiting extended family in Michigan and took every opportunity to be surrounded by trees or near Lake Michigan. Shelly originally graduated with a degree in small animal biology from the University of Illinois but was unable to pursue it due to the onset of her rheumatoid arthritis. Instead, Shelly pivoted and obtained a B.S. and M.S. in speech pathology from Illinois State University. She practiced speech pathology in Danville, supporting in-home and hospital patients until her disability led to an early retirement. Shelly was a lover of animals and nature. She cared for many rescue pets, such as dogs Maggie and Bella, and supported multiple animal charities, including The Elephant Sanctuary in Tennessee. Her home was filled with giraffe and elephant figurines, plants, and artwork. When she was still able, Shelly loved being outside, working in the yard, and flower gardening. She was often shocked that more people didn’t enjoy raking leaves. She encouraged those of us who physically could rake to enjoy it more. Shelly was a great baker and enjoyed word puzzles, Jeopardy, and listening to all types of music. She also loved spending time with family and friends. Shelly was a longtime viewer of the soap opera Days of Our Lives and was an adamant fan of Bo and Hope. Per Shelly’s wishes, she was cremated and there will be no funeral service. In lieu of flowers, Shelly requested donations be made to the Hoopeston Animal Rescue Team or any animal/nature charity of your choice.

Shelly Ann (Franklin) Henson, 66, of Hoopeston passed away on February 6, 2021 at Carle in Urbana surrounded by family. Shelly died from natural causes after a brave battle with rheumatoid arthritis, which she fought for over 40 years. Shelly... View Obituary & Service Information

The family of Shelly Henson created this Life Tributes page to make it easy to share your memories.

Shelly Ann (Franklin) Henson, 66, of Hoopeston passed away on...

Send flowers to the Henson family.