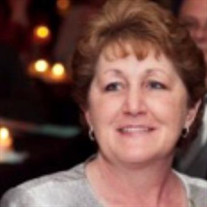 Sheila M. Walter, 63, of Rossville, IL, formerly of Hoopeston, IL, passed away at 4:25 P.M. Tuesday October 13, 2020 at her home. She was born February 10, 1957, in Jamestown, TN, the daughter of Cordell and Willadean (Clayburn) Koger. She married Dean Walter on January 26, 1980 at their home in Hoopeston, IL. He survives in Rossville, IL. She is also survived by two daughters, Telisa Walter of New York City, NY and Jamie (August) Christhilf of Champaign, IL; two sisters, Diane (Russ) Coulter of Gibson City, IL and Margaret (Bill) King of Bloomington, IL; one brother, JR (Teri) Koger of Whiteland, IL; one sister-in-law Sharon Koger of Virginia Beach, VA; 5 grandchildren, August, Philip, Camille, Leo, and Mark Christhilf; several nieces and nephews; and several great-nieces and great-nephews. She was preceded in death by her parents and one brother, Robert Koger. Sheila worked at Howard Industries for 19 years and later worked at DACC for 20 years until her retirement. She attended the Chestnut Street Church of Christ in Hoopeston where she was very active. She enjoyed working in her flower garden and her greatest enjoyment was spending time with her family, especially her grandchildren. A visitation will be held 10:00 A.M. -12:00 P.M. Monday October 19, 2020 at Anderson Funeral Home 427 E. Main St. Hoopeston, IL. A private funeral service will be held followed by a public graveside service at 1:45 P.M. Monday at Floral Hill Cemetery in Hoopeston, with Pastor John Morris and Rev. Gary Milton officiating. We kindly ask that face coverings be worn and social distancing is maintained by those who attend the visitation and/or service. Memorials may be made to the Chestnut Street Church of Christ 709 E. Chestnut St. Hoopeston, IL 60942 or the American Brain Tumor Association, 8550 W Bryn Mawr Ave, Ste 550, Chicago, IL 60631.

The family of Sheila M. Walter created this Life Tributes page to make it easy to share your memories.

Send flowers to the Walter family.