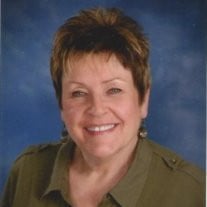 Sharon Adele Miles, 64, of Rossville, IL, passed away at 10:40 P.M. Monday December 16, 2013, at Presence United Samaritans Medical Center in Danville, IL. She was born March 11, 1949 in Williamsport, IN, the daughter of Kneeland LeRoy and Vera Laurie (Gray) Singleton. She is survived by her mother Vera Singleton of Paxton, IL, formerly of St. Joseph, IL; one daughter, Stacey (Bob) Jones of Paxton, IL; one son, Jason (Jennifer) Miles of Paxton, IL; one brother, Ronald (Susan) Singleton of Fernandina Beach, FL; 6 grandchildren; two nieces and one great-nephew. She was preceded in death by her father Kneeland Singleton and one son, Brant “Bub” Miles. Sharon graduated from Rossville High School in 1967 and Southern Illinois University in 1969. She worked as a dental hygienist for Dr. Ronald L. Lewis DDS in Danville for over 30 years. She was a member of the Rossville Church of Christ. Sharon was a very caring, giving and compassionate lady. She enjoyed giving back to her community by being involved in the Rossville Community Organization, where she was active in helping with many community projects. She also enjoyed helping others by donating to the Danville Salvation Army. Her hobbies included watching Illini basketball games and Nascar races, reading, working puzzles and listening to music. Sharon also enjoyed traveling with her friends, but her greatest enjoyment in life was spending time with her family and grandchildren. Memorials may be made to the Rossville Church of Christ 514 E. Attica St. Rossville, IL 60963 in Sharon’s honor.

Sharon Adele Miles, 64, of Rossville, IL, passed away at 10:40 P.M. Monday December 16, 2013, at Presence United Samaritans Medical Center in Danville, IL. She was born March 11, 1949 in Williamsport, IN, the daughter of Kneeland LeRoy and... View Obituary & Service Information

The family of Sharon Adele Miles created this Life Tributes page to make it easy to share your memories.

Send flowers to the Miles family.