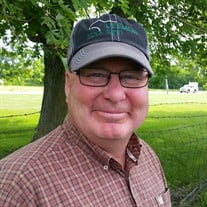 Scott Franklin Leemon, 53, of Hoopeston, IL, passed away at 11:00 A.M. Tuesday April 19, 2016 at Barnes Jewish Hospital in St. Louis, MO. He was born October 30, 1962 in Hoopeston, IL, the son of Charles Burnham and Elaine Pearl (Elliott) Leemon. He married Janet Lee Jordan on June 30, 1984 in Rensselaer, IN. She survives in Hoopeston. He is also survived by his mother, Elaine Pearl Leemon of Hoopeston, IL; three sons, Cody Dean Leemon, Wesley Scott Leemon (his fiancé Danielle Erin Kirby) and Clint Alan Leemon all of Hoopeston, IL; three sisters, Louise Barten of Hoopeston, IL, Peggy (Gary) Winzenburger of Washington, MO and Linda Payne of Champaign, IL; one brother, Charles (Dixie) Leemon of Hoopeston, IL; his mother and father-in-law, Dave and Marianne Jordan of Rensselaer; one sister-in-law, Leigh (Brian) Swim of Algonquin, IL; one niece, Laura Leemon and nine nephews, Bruce Leemon, Adam Winzenburger, Steven Winzenburger, John Barten, Jeff Barten, Matt Payne, Zachary Swim, Hayden Swim and Carter Swim. He was preceded in death by his father Charles “Chuck” Leemon and two brothers-in-law Kevin Payne and Damon Jordan. Scott’s passion was farming. He loved to wake before dawn, watch the sunrise and get the day started. Growing high yielding corn was his mission and he never considered what he did to be work. He loved being in a tractor and working side by side with his sons. He never got tired of the long days because he loved what he was doing. Scott was carrying on the family farm which now is being passed on to the fifth generation. The Leemon family has had shorthorn cattle since 1901 being the oldest in the United States. In 2011 Scott and his family were named the Shorthorn Country’s builder of the breed. Scott was a board member of the American Junior Shorthorn Association. He was an Illinois voting delegate to the American Shorthorn Association annual meeting. He was also a member of the Hoopeston United Methodist Church. Scott served as a commissioner for the Hoopeston Drainage District. He enjoyed hunting deer, duck, and geese whenever he got the opportunity. Scott volunteered as a high school wrestling coach and greatly enjoyed every chance to be on the mat with his sons. A visitation will be held 2:00 – 6:00 P.M. Sunday April 24, 2016 at Anderson Funeral Home 427 E. Main St. Hoopeston. The funeral service will be held 11:00 A.M. Monday April 25, 2016 at the funeral home, with Pastor Cathy Najmon and Steve Unger officiating. Per his wishes he will be cremated and his ashes will be scattered at the family farm. Memorials may be made in Scott’s memory to the Leukemia & Lymphoma Society Illinois Chapter 651 W. Washington Blvd., Suite 400 Chicago, IL 60661 or The Shorthorn Foundation 1800 Lovers Leap Van Alstyne, TX 75495.

The family of Scott Franklin Leemon created this Life Tributes page to make it easy to share your memories.

Send flowers to the Leemon family.