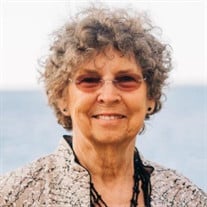 Sandra “Sandy” Kay Redinbo, 80, of West Lafayette, IN, formerly of Hoopeston, IL, passed away at 7:40 A.M. on Tuesday, April 7, 2020 at University Place in West Lafayette, IN. She was born March 2, 1940 in Hoopeston, IL, the daughter of William and Frances (Campbell) Thomas. She married Ronald Redinbo on September 1, 1962 in Lafayette, IN. He preceded her in death. Surviving Mrs. Redinbo are her daughters, Stacy (Johnny) Stegall of North Tustin, CA, Jill (John) Stahman of Irvine, CA, and Julie Redinbo of Riverside, CA; son, Scott Redinbo of North Carolina; sisters, Ellen Franklin of Hoopeston, IL and Penny Bosley of Terre Haute, IN; brother, Terry (Marlene) Thomas of Danville, IL; and five grandchildren. She was preceded in death by three siblings, Patricia “Jody” Thomas, Judi Obenland, and William “Bud” R. Thomas. Mrs.Redinbo was a Medical Transcriptionist and Executive Secretary for many years. In 1975, she received her Associate in Arts degree. Mrs.Redinbo was artistic, excelling in oil and watercolor painting. She spent some of her happiest moments traveling the world, with her favorite locations as Africa, Ireland, Israel, and Egypt. She enjoyed playing bridge several times a week. Due to the current health concerns a private family graveside service will be held. A visitation of family and friends will be held at a later date. Memorials may be made to the Donor’s Choice.

The family of Sandra "Sandy" Kay Redinbo created this Life Tributes page to make it easy to share your memories.

Send flowers to the Redinbo family.