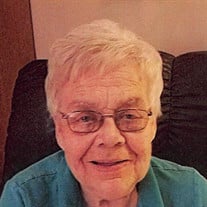 Sandra J. Hughes, 76, of Rossville, IL passed away Tuesday, December 19, 2017 at 12:00 P.M. at Heritage Health Therapy and Senior Living in Hoopeston, IL. She was born June 6, 1941, the daughter of Orville and Doris (Barragree) McCalla. She... View Obituary & Service Information

The family of Sandra J Hughes created this Life Tributes page to make it easy to share your memories.