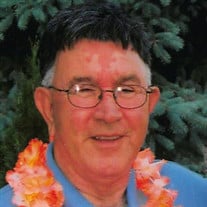 Samuel D. Rayfield, 77, of Rossville, IL, passed away Sunday August 25, 2019 at Carle Hoopeston Regional Health Center. He was born September 13, 1941, in Danville, IL. Sam married Karen Masengale on September 12, 1964, at the Rossville United Methodist Church. She survives, along with their son, Jason, daughter-in-law, Erica, and grandsons, Justin and Jamie. Sam’s family includes sister, Becky (Carl) Olson and sister-in-law, Judy Rayfield. His family by marriage includes, Linda Masengale, John Masengale, Ron (Cindy) Masengale, and Dennis (Sally) Bassett. He was idolized by his 14 nieces and nephews, 28 great-nieces and nephews, and 3 great-great-nieces and nephews. He was preceded in death by his parents, Viola and George Gocking, and father, David U. Rayfield; brother, David J. Rayfield; mother-in-law, Viona Masengale; father-in-law, Earl Masengale; sisters-in-law, Sharon Bassett and Donna Masengale; brother-in-law, Larry Masengale; and nephew, Brian Masengale. Sam attended Rossville schools where he and his brother, Dave, were standouts on the basketball and football teams. After high school, he served in the National Guard and worked for many years as an electrician and heating and cooling salesman. His community involvement included serving with the Rossville Fire Department, Rossville Park Board, Rossville United Methodist Church Board, and helping found the Rossville Ambulance Service. On many Friday nights, he refereed area high school football games. Sam’s favorite topic of conversation and way to spend his free time was with the grandsons he adored, Justin and Jamie. He loved to teach the boys to fish, watch their activities or organize weekend fun in the backyard. For nearly 50 years, Sam would travel for a week of fishing on Lake Martin in Alabama with a favorite cousin. The rest of the year he would take Jason and many friends and family fishing at spots near and far, especially the Polywogs. When he wasn’t fishing, he also enjoyed golf, NASCAR, and Gaither music on Saturday nights. Sam’s kindness was legendary among his family and friends. He always had time to lend a hand or attend family special events, wearing a grin that made his eyes twinkle. He will be deeply missed by all who were lucky enough to know him. A visitation will be held 4:00 -8:00 P.M. Wednesday August 28, 2019 at Anderson Funeral Home 427 E. Main St. Hoopeston, IL. A Celebration of Life will be held at 11:00 A.M. Thursday August 29, 2019 at the funeral home, with Pastor Chris Quick officiating. No burial will be held. The family has requested all memorial donations be directed to the Rossville Fire Department, Rossville United Methodist Church, or to the Sharon L. Masengale Bassett (Karen’s sister) Breast Cancer Fund (through OSF Healthcare Foundation).

The family of Samuel D. Rayfield created this Life Tributes page to make it easy to share your memories.

Send flowers to the Rayfield family.