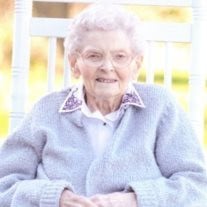 Samantha Annajane Swartz, 94, of Wellington, IL, passed away at 8:06 A.M. Tuesday March 25, 2014, at Autumn Fields Adult Community in Hoopeston, IL. She was born June 8, 1919, in Wellington, IL, the daughter of Hubert and Carrie (Ross) Echard. She married Wade Swartz on June 5, 1946 in Wellington, IL. He preceded her in death. She is survived by one son, Ross (Diane) Swartz of Wellington, IL; two sisters-in-law, Lila Foster of Wellington, IL and Evelyn Swartz of Hoopeston, IL; three grandchildren, Tia (John) Petersen, Megan (Damian) Swartz-Foley and Luke (Sally) Swartz; 6 great-grandchildren, Hunter, Tucker, Trevor, Sophia, Alexsa and Fletcher and several nieces and nephews. She was preceded in death by her parents; one daughter, Roxie Swartz; one sister, Nellie Cunningham and one brother, Carl Echard. Mrs. Swartz began her teaching career in a one room schoolhouse out in the Antioch area. She later taught in Wellington for a few years, and then taught at Maple Grade School in Hoopeston, until her retirement. She was an active member of the Wellington United Methodist Church, serving as past Sunday School Superintendent, Sunday School Secretary, member of the choir and attended Bible study. She was also a member of the Eastern Star, the Wide Awake Club and the Hoopeston Hospital Auxiliary. Annajane enjoyed doing yard work, bird watching, making crafts, sewing, baking and cooking. She also enjoyed taking trips to Florida, watching sports on television, especially the Chicago Cubs and most of all; she enjoyed spending time with her family. Memorials may be made to the Wellington United Methodist Church 410 E. Main St. Wellington, IL 60973 or Iroquois Memorial Hospice 200 Laird Lane Watseka, IL 60970.

The family of Samantha Annajane Swartz created this Life Tributes page to make it easy to share your memories.

Send flowers to the Swartz family.