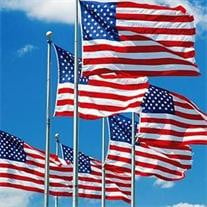 Roy J. Goin Jr., 75, of Rossville, IL, passed away at 8:43 P.M. on Wednesday September 25, 2013 at his home. He was born December 6, 1937, in Hoopeston, IL, the son of Roy J. Goin Sr. and Lillian (Hansen) Goin. He married Carol F. Pettice on December 21, 1955 in Alvin, IL. She preceded him in death on January 24, 2013. He is survived by three daughters, Crystal (Robert) Bruner of Rossville, IL, Robin Goin (Dennis Thomas) of Hoopeston, IL and Jeri Galyen of Rossville, IL; one son, James (Angie) Goin of Rossville, IL; one brother, Ralph (Judy) Goin of Fort Mojave, AZ; 7 grandchildren, 9 great-grandchildren and several nieces and nephews. He was preceded in death by his parents and one sister, Nettie Lou Goin. Roy served in the United States Navy, where he and his wife Carol were stationed in Jacksonville, FL and Portsmouth, VA. In 1976, after 22 years of service, he retired from the U.S. Navy and returned to Illinois. After his retirement, he worked at Jock Colling and then Mettem Safety. He later worked at Supersweet Feeds and the Village of Rossville. Roy enjoyed watching sports. He especially liked the Chicago Cubs, Bears, Blackhawks and Bulls.

The family of Roy Goin, created this Life Tributes page to make it easy to share your memories.

Send flowers to the Goin, family.