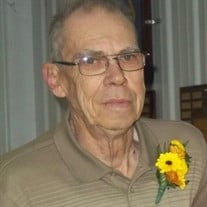 Ross C. Butzow, 76, of Wellington, IL, passed away on Tuesday May 17, 2016 at his home in Wellington. He was born April 26, 1940 in Lovejoy Township, the son of Lewis G. and Velma Anna Butzow. He married JoAnn Steiner on October 11, 1964 in Watseka, IL. She survives in Wellington. He is also survived by one daughter, Andrea (Dennis) Glotzbach of Hoopeston, IL; one son, Douglas (Linda) Butzow of Paxton, IL; three brothers, Ralph Butzow, Stanley (Sallee) Butzow, and Norman (Lois) Butzow; five grandchildren, Lincoln Butzow, Zoe Butzow, Ryan Glotzbach, Gage Glotzbach, and Emma Glotzbach and five nieces. He was preceded in death by his parents. Ross ran his own welding business for fifty-five years and was known for his meticulous and conscientious attention to detail, providing quality work in everything he did. He was a firefighter for the Wellington-Greer Fire Department for forty-four years and was Fire Chief for twenty-seven years, prior to that he was an assistant chief and training officer. He attended firefighting classes at DACC and was a firefighter II. Ross also had served on the Wellington Village Board and was an active member of the Claytonville United Brethren in Christ Church. He was also a life member of the American Welding Society. Ross enjoyed spending time with his family and going to his grandchildren’s activities and teaching his grandson to weld. He also enjoyed photography and bowling. Ross was known for riding his bike for coffee, to fire runs, and to get the mail. Ross always felt he was serving God by serving others especially with his fire department duties or services. He truly enjoyed helping others. A visitation will be held 4:00 – 8:00 P.M.Thursday May 19, 2016 at Anderson Funeral Home 427 E. Main St. Hoopeston, IL. An hour visitation will be held prior to the funeral service from 9:00 - 10:00 A.M. and the funeral service will begin at 10:00 A.M. Friday May 20, 2016 at the funeral home, with Pastor Dustin Wells officiating. Burial will follow in the Amity Cemetery in Goodwine. Memorials may be made in Ross’ honor to the Wellington-Greer Fire Department P.O. Box 143 Wellington, IL 60973 or Donor’s Choice.

The family of Ross C. Butzow created this Life Tributes page to make it easy to share your memories.

Send flowers to the Butzow family.