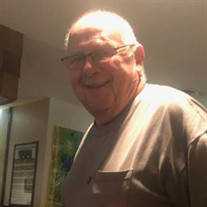 Ronnie Guy "Hot Dog" "Pork" Longfellow, 72, of Hoopeston, IL, passed away at 9:31 A.M. Thursday March 12, 2020 in Hoopeston. He was born October 22, 1947, in Albany, KY, the son of Gilbert “Gib” and Georgia (Ferguson) Longfellow. He married Marilyn Tincher on November 15, 1968 in Hoopeston. She survives in Hoopeston. He is also survived by two sisters-in-law, Linda Harmeson of Watseka, IL and Sandy (Steve) Dazey of Hoopeston, IL; two brothers-in-law, Bill (Karen Bray) Tincher of Hoopeston, IL and Chuck Tincher of Hoopeston, IL; six nieces and nephews, Shelly (Stan) Snyder, LeAnne (Randy) Stebbins, Lonnie Davis, Kim (Matt) Nelson, Jason (Lindsey) Tincher, and Phil (Karolyn) Tincher; several great-nieces and great-nephews; and two grand pups, Abby and Jasper. He was preceded in death by his grandparents, parents, mother-in-law and father-in-law, one sister-in-law, three brothers-in-law, and several cousins. Ronnie worked at FMC in Hoopeston as welder for many years. He later became an over the road truck driver for Nussbaum and later AutoZone. After his retirement he drove a grain truck. He was a member of the VFW and enjoyed fishing and camping. Per his wishes, he will be cremated. A visitation will be held 4:00 – 6:00 P.M. Monday March 16, 2020 at Anderson Funeral Home 427 E. Main St. Hoopeston, IL. Burial will be held at a later date. Per the family’s request, anyone who is ill please refrain from attending. Memorials may be made to the Hoopeston Animal Rescue Team 901 W. Main St. Hoopeston, IL 60942.

The family of Ronnie Guy "Hot Dog" "Pork" Longfellow created this Life Tributes page to make it easy to share your memories.