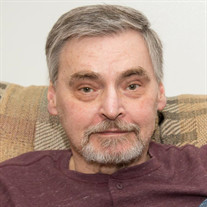 Ronald L. Lacy, 72, of Hoopeston, IL, passed away at 3:53 P.M. Saturday February 19, 2022, at Carle Foundation Hospital in Urbana, IL. He was born April 3, 1949, in Danville, IL, the son of Maxwell and Helen (Stringham) Lacy. He married Sharon Rhodes on December 4, 1971, at the Hoopeston United Methodist Church. She survives in Hoopeston. He is also survived by two sons, Phillip (Amy) Lacy of Oakwood, IL and Matthew (Traci) Lacy of College Station, TX; one brother, Richard (Lynnell) Lacy of Urbana, IL; four grandchildren, Allison, Elizabeth, Maxwell, and Catherine; and several nieces and nephews. He was preceded in death by his parents. Ronald worked at American Can in Hoopeston for twenty-six years and later at Sigma in Danville. He most recently worked at Con-Agra until his retirement. He served in the United States Air Force. Ronald enjoyed Ham radio, building battleship models, and collecting vinyl records. He loved his huskie dogs and most of all, traveling and spending time with his family especially his grandchildren. A visitation will be held 10:00 – 11:00 A.M. Thursday February 24, 2022, at Anderson Funeral Home, 427 E. Main St. Hoopeston, IL. The funeral service will follow the visitation and will begin at 11:00 A.M. Thursday at the funeral home with Pastor Kathy Murphy officiating. Burial will follow in Floral Hill Cemetery in Hoopeston. Memorials may be made to the Leukemia Society, PO Box 22324, New York, NY 10087 or to the Parkinson's Foundation, 200 SE 1st Street, Suite 800, Miami, FL 33131.

The family of Ronald L. Lacy created this Life Tributes page to make it easy to share your memories.

Send flowers to the Lacy family.