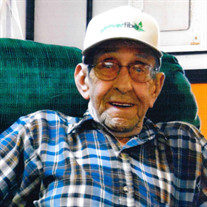 Ronald A. “Poppy” Gossett, 86, of Hoopeston, IL, passed away at 2:45 P.M. Tuesday May 3, 2022, at his home. He was born August 5, 1935, in Hoopeston, the son of Clarence and Blanche May (Holt) Gossett. He married Joyce A. Pentecost on July 16, 1955, in Milford, IL. He is survived by his daughter, Connie Gossett Mills (Bob Bruens) of Hoopeston, IL; one son, Randall L. (Sherry) Gossett of Hardyville, KY; one sister, Betty J. (Laverne) Hamm of Danville, IL; one sister-in-law, Joann Gossett of Charleston, IL; six grandchildren, Jennifer Mills, Erin Mills, Anthony Mills, Josh Gossett, Matthew Gossett, and Katie Gossett; three great-grandchildren, Laynee and Raeghan Dickison and Dawson Burton; and several nieces and nephews. He was preceded in death by his wife, Joyce, of 52 years; his parents; and three brothers, Gerald, Harold (Ruth), and Donald (Doris) Gossett. Ronnie worked at Hotts Lumber & Coal Company for 10 years and later at American Can as a forklift driver for 25 years until his retirement. He loved his family, especially his grandchildren and enjoyed watching their sporting events. He also loved old cars and tractors and enjoyed woodworking and visiting with his friends at McDonald’s and Henning’s. Ronnie always enjoyed a good cup of coffee and a cigarette. A visitation will be held 5:00 – 7:00 P.M. Tuesday May 10, 2022, at Anderson Funeral Home 427 E. Main St. Hoopeston, IL. The funeral service will be held at 11:00 A.M. Wednesday May 11, 2022, at the funeral home. Burial will follow in Floral Hill Cemetery in Hoopeston. Memorials may be made to the Hoopeston Area Softball Association.

The family of Ronald A. "Poppy" Gossett created this Life Tributes page to make it easy to share your memories.

Send flowers to the Gossett family.