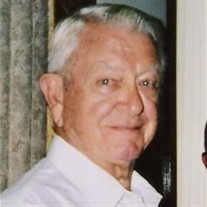 Roger W. Brown, 86, of Nashua, NH, formerly of Alvin, IL, passed away peacefully, Saturday, March 19, 2016. He was born on May 23, 1929, in Danville, IL. Roger was the son of the late Hoyt and Florence (Cole) Brown who operated Browns Grocery for thirty-seven years until 1953. Roger was a baseball pitcher, and he signed a professional baseball contract with the Brooklyn Dodgers, at the young age of 15, after his sophomore year at Alvin High School, May of 1945. He played for various farm teams in the MLB. Roger was and still is the youngest to ever sign with the Dodgers. His uniform can be seen at the Rossville Historical Society. Roger graduated from Alvin High School in 1947, which was the next to last graduating class before consolidating with Rossville. He then attended Illinois State two years, transferring to and graduating from the University of Illinois with a B.S. degree in Business. Upon graduating from college, he joined the United States Air Force and served as an auditor with the rank of 1st Lieutenant. Roger was later discharged on hardship after the loss of his first wife and four month old son in a train auto accident, while he was stationed in Arabia. Roger left Illinois for California in early 1954 to start a career in aerospace and electronics. It was then he was fortunate enough to work with NASA and meet Neil Armstrong, John Glenn, Alan Shepard, and Gus Grissom. At the age of 38 he was promoted to Group Vice-President of Industrial Relations, for General Dynamics, Chicago, IL. Roger left General Dynamics to become Vice-President of Personnel, for AMTRAK, in Washington, DC. After seven years with AMTRAK, he left to become Corporate Vice-President of Human Resources at the Sanders Division of Lockheed Martin in Nashua, New Hampshire. While at Sanders, Roger completed his Master’s degree in Business at New Hampshire College. He started work on the degree at Harvard University some seven years earlier. He then joined the part-time faculty at New Hampshire College Graduate School teaching part-time for seventeen years. Roger retired in 1991 Roger’s notable work ethic never kept him from coming home to his roots of Alvin, IL and traveling with his wife of 32 years, Mary (Fennell) Brown. Roger and Mary traveled through Europe, South America and spent their winters in Naples, Florida. Roger’s hobbies of golf, fishing, and hunting, kept him in close contact with many friends. He truly loved bringing Mary, and his son, Roger (Bud) to visit his second family, Robert and Mary Ingram and family of Rossville, IL. Roger thoroughly enjoyed taking his son hunting the prairie of Illinois where he grew up. The Ingram children will cherish his memories of walking them on the ceilings and the stories of the Alvin tornado and mapping out all the businesses once lining the streets of Alvin. Roger was a member of the Rossville American Legion #733 and was a 32nd Degree Mason at the Hoopeston Star Lodge #709. Roger is survived by his wife of 32 years, Mary (Fennell) Brown; his son, Roger W. Brown II from his second wife, Iris Dirks Brown; four grandchildren, Lindsay (Ronald "Zippy") Roberts of AZ, Trevor Chapman of OK, and Ryan and Tyler Brown of Nashua; as well as four great-grandchildren. He was predeceased by his first wife, Audrey Watkins Brown and son Jeffery; his second wife Iris Dirks Brown, and his daughter Susan (Brown) Chapman. A celebration of Roger’s life will be held at 11:00 AM, Saturday, April 16, 2016, at the Rossville United Methodist Church 116 Maple St. Rossville, IL, where he was a member. Pastor Carl Mesiti will officiate the service. Graveside rites with military services will be immediately following the celebration at the Rossville Cemetery, in Rossville, IL. The family requests in lieu of flowers, a memorial donation be made in his name to Homer Carter Park of Alvin, P.O. Box 169, Alvin, IL, 61811, or the Rossville American Legion, P.O. Box 194, Rossville, IL 60963.

Roger W. Brown, 86, of Nashua, NH, formerly of Alvin, IL, passed away peacefully, Saturday, March 19, 2016. He was born on May 23, 1929, in Danville, IL. Roger was the son of the late Hoyt and Florence (Cole) Brown who operated Browns Grocery... View Obituary & Service Information

The family of Roger Brown created this Life Tributes page to make it easy to share your memories.

Send flowers to the Brown family.