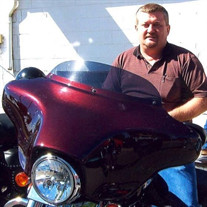 Robert J. “R.V.” Vaughn, 57, of Rossville, IL, passed away at 8:00 A.M. Friday December 25, 2015 at his home. He was born on June 21, 1958 in Danville, IL, the son of Gerald and Dorothy (Williams) Vaughn. He married Dorothy David on September 08, 1984 in Hoopeston, IL. She survives in Rossville, IL. R.V. is survived by one daughter, Carissa Vaughn of Rossville, IL; three sons, Douglas (Sabrina Richardson) Vaughn of Hoopeston, Kyle Vaughn of Rossville and Andrew Vaughn of Rossville; seven sisters, Vauna (Daryol) Proper of Utica, PA, Carlene (Duane) Rascher of Cissna Park, IL, Theresa (Marty) Casner of Rossville, Donna (Gordon) Coffey of Rossville, Tina (Chris) Cox of Rockville, IN, Diane Coriell of Kankakee, IL, and Doris Schultz of Rossville, IL. He is also survived by six grandchildren, several nieces and nephews, and future daughter-in-law, Elvia Garnica and future son-in-law, Chase Bouse. He was preceded in death by his parents; one daughter, Shayla; three brothers and one sister. R.V. was a truck driver for USF Holland. He was a member of the Rossville Fire Department for 22 years. He was also a member of the Masonic Lodge and the Sons of the American Legion. A visitation will be held 4:00 P.M. – 8:00 P.M. Monday December 28, 2015 at Anderson Funeral Home 427 E Main St. Hoopeston, IL. The funeral service will be held at 11:00 A.M. Tuesday December 29, 2015 at Anderson Funeral Home, with Larry Baughn officiating. Burial will be at the Rossville Cemetery in Rossville. Memorials may be made in Robert’s memory to the Rossville American Legion, 104 Thompson Street, Rossville, IL 60963.

The family of Robert J. "R.V." Vaughn created this Life Tributes page to make it easy to share your memories.

Send flowers to the Vaughn family.