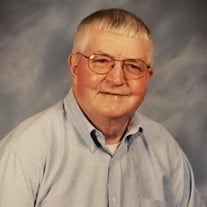 Robert Linton “Bob” Neeland, 92, of Rossville, IL, passed away at 1:40 A.M. Sunday December 12, 2021, at Heritage Health Therapy and Senior Living in Hoopeston. He was born May 11, 1929, in Kansas City, MO, the son of Leslie Neeland and Genieva (Ross) Neeland Holm and step-father, Harold Holm. He married Eva Smith on November 1, 1953, in Rossville, IL. He is survived by Eva Smith Neeland, his wife of 68 years, as well as by his daughters, Kathleen (David) Pruitt of Milford, IL and Patricia (Gregory) Paquette of Katy, TX. He is also survived by his sister, Lois (Frank) Galliher of Junction City, KS; step-brother, Harold (Daphne) Holm of Johnson City, TX; sister-in-law, Darlene Smith of Fremont, NE; brother-in-law, Harold O. Wilson of Junction City, KS; four grandchildren, Kyle Zarate of Adairville, KY, Seth (Traci) Zarate of Rossville, IL, Chelsea Paquette of Houston, TX, and Matthew Paquette of Midland, TX; two great-grandchildren, Reed Zarate of Rossville, IL and Mackenzie (Wes) Ravens of Rossville, IL; 4 nieces; and 1 nephew. He was preceded in death by his mother, Genieva Holm, father, Leslie Neeland; step-father, Harold Holm; sister, Nadine Wilson; sister-in-law, Ruby Breeding; and brother-in-law, Lloyd Smith. Bob grew up in central Kansas and is a 1947 graduate of Junction City High School in Junction City, Kansas. He served in the United States Air Force during the Korean conflict from 1950 - 1954 where he earned the rank of Staff Sergeant. He met and fell in love with Eva while stationed at Chanute Air Force Base in Rantoul, IL. Following his discharge, they returned to live first in Hoopeston and then in Rossville. Bob worked as a type-setter, printer, and in sales for Mills Publications of Hoopeston for several years. He then worked as a machinist for American Can Company (Silgan Containers) until his retirement in 1992. He was a member of the Rossville United Methodist Church. Bob was very active in his community, serving on the Ross Township Cemetery Board and participating in Chrisman Park Improvements with many of his friends in retirement who had time, tools & skills. He was a member of the Rossville Historical Society and the Rossville-Alvin Bobcat Booster Club. He was also a sixty-six-year member of the Spears Dukes American Legion Post #733 in Rossville and served on the post Honor Guard. Bob enjoyed puttering in his garage, woodworking, feeding the birds and squirrels, fishing, and farming. He enjoyed playing cards, watching basketball & football games, listening to music, and socializing with friends. For years he could be found “with the guys” for early coffee at Bray’s Store and the barbershop in Rossville. He enjoyed sitting on the deck at the house in Rossville catching up on the news often with a grandson and a cold Bud Light. He loved his family and especially spending time with his grandkids. Per his wishes, cremation rites will be accorded. A visitation will be held 10:00 A.M. – 12:00 P.M. Tuesday December 21, 2021, at Anderson Funeral Home 427 E. Main St. Hoopeston, IL. The memorial service will follow the visitation and will begin at 12:00 P.M. Tuesday December 21, 2021, at the funeral home with Pastor Chris Quick officiating. Military rites will be accorded by the Hoopeston American Legion Post #384. A private family burial will be held. His family would like to thank the many caregivers who made it possible for him to live his best life over the last few years. The staff at Autumn Fields of Hoopeston were always kind and supportive. Heartfelt appreciation to the nursing staff of both Transitions Hospice and Heritage Health who worked together to provide compassionate care to ease his final journey. In lieu of flowers, memorials may be made in Bob’s honor to the Rossville Fire Protection District, Transitions Hospice at 201 N. Randolph St. Champaign, IL 61820, or to a charity of your choice.

The family of Robert Linton "Bob" Neeland created this Life Tributes page to make it easy to share your memories.

Send flowers to the Neeland family.